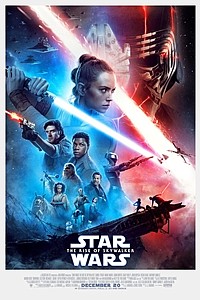 Well, that’s over. After Rian Johnson’s Episode VIII: The Riling of the Fanbase, Disney lets J.J. Abrams resume the Star Wars cockpit, and the man who gave new meaning to fan service with The Force Awakens wastes no time before initiating course correction. When we meet up with brash pilot Poe, he’s lightspeed-skipping his way out of trouble, and Abrams is in much the same mode, whisking you from one thing to the next before you have much time to think or feel anything in response. Suffice to say, there’s a terrible new (or old, depending on how you reckon it) threat out there, and very little time to do anything about it, and our heroes need to find a clue that will help them find a tracker that will help them find…you get the idea. Mission, mission, mission, and hope the characters can register along the way. They can’t, not when they’re made to do things that don’t make much sense except in the service of spectacle — viz. just about every Force-fed encounter between conflicted baddie Kylo Ren and even more conflicted goodie Rey. (One of them includes the film’s biggest howler: a version of Obi-Wan’s “What I said was true, from a certain point of view” that serves as a direct rebuke of Johnson’s vision.) It’s a ride, but it’s exhausting, and not just for the audience: by the time Poe is rallying the troops for the big battle, he sounds utterly pooped. It’s a pity; the big battle in the sky is a bust, but the personal drama that goes on down below feels like what Abrams should have been attending to all along. Fans of the series will groove to the old familiar beats and see the old familiar sights. For some, that will be enough — maybe even satisfying. Others may find themselves wondering exactly why they used to love this stuff so much.