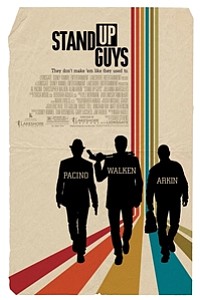 For 28 years, two loyal friends serve a concurrent prison sentence: Val (Al Pacino), behind bars for refusing to finger an associate, and Doc (Christopher Walken), on the outside, waiting to perform the hit when his old partner is released. You might think there isn’t much to this gangsters-get-old fable that hasn’t already been depicted in similar outings (Going in Style, Tough Guys). But then, you’ve never seen it played by Pacino, Walken, and Alan Arkin. As with most films of this type, Stand Up Guys is a love story between men, but for a change, it’s not simply a boys’ club. Lucy Punch, Julianna Margulies, Vanessa Ferlito, and newcomer Addison Timlin all add credence and consequence to our trio’s decisions. Director Fisher Stevens’s greatest sin is keeping the camera in too close, but with this trio of wizened, aged-in-elegance mugs, one can’t really fault him.