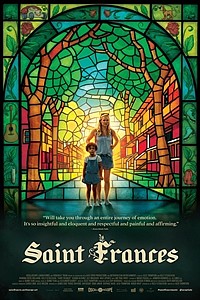 Bridget (screenwriter Kelly O’Sullivan) is a self-proclaimed agnostic feminist who’s not quite ready to be a mother, or much of anything else for that matter. Given her admitted aversion to responsibility, a snarky aside aimed at the religious art adorning her potential employers’ wall, and a pronounced eagerness to bail in mid-interview, it’s a wonder that she gets the job nannying for a biracial lesbian couple. Any topic can be made funny given the right approach, even abortion and postpartum depression. The woman seated next to Bridget at the clinic asks, “Is this your first time?” The joke’s payoff and the spoiler that comes with it gave rise to repeated slappings of the knee. Ditto the deployment of vaginal secretions as a running (runny?) gag that’s bloody brilliant. First-time director Alex Thompson’s normalizing drive to be all things to all people frequently does so at the expense of character development, and it wasn’t until an hour into the picture and a mean-spirited in-joke between nanny and her charge that one began to feel an affection for the duo. Still, imperfections can sometimes be beautiful. See this movie!