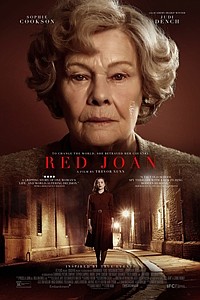 Fictionalized commie sympathizer Joan “Granny Spy” Stanley, the KGB’s longest-serving British informer, is here given her own fact-based biopic. The film is strangely reminiscent of the recent role-reversal comedy Little, inasmuch as audiences flocking to see the latest from Judi Dench are bound to be disappointed upon learning that the majority of the picture unfolds in flashback, with Sophie Cookson doing most of the heavy lifting as Young Joan. I don’t fault Dame Judi one bit for phoning in her role; if anyone’s earned a paid vacation it’s she. But someone should inform director/slumming Thea-tuh impresario Trevor Nunn that what works on the stage doesn’t always work on the screen. Nunn’s idea of layering his narrative is to every seven minutes or so insert a present day close-up or two of Dench to justify her star-billing. The romance is spark-free, the espionage anesthetizing, and the “mother was a red” subplot between Stanley and her disgraced son flat-out sleep-inducing.