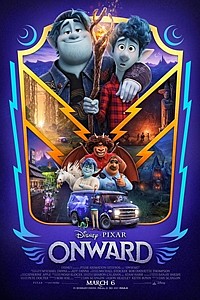 A magical staff that once belonged to the deceased father they never knew is left in the care of geeky elf Ian’s bothersome older brother Barley. But it comes with instructions that it be given to the younger brother on the occasion of his 16th birthday, and what’s more, it comes with the power to bring dad back to life for a 24-hour period (and a premise that’s too good to be true). Alas, Ian botches the reading of the magic spell; all he can conjure up is dad’s lower torso. Instead of providing a pithy, Finding Nemo-ish examination of father and son relationships, the film slaps a leash on dad’s belt buckle and proceeds to hammer the one joke to death. It also raises the question: why animate when pretty much everything that happens in the opening third could have been achieved with live actors, a green screen, and a bucket of Max Factor blue? There’s a bit of a reprieve when the fantasy elements kick in midway through, but all that leads to is a prolonged and tiresome third act chase. After Cars 2 & 3 , and Incredibles 2, this is another slip on Pixar’s downward spiral.