Once Upon a Time...in Hollywood 3.0 stars 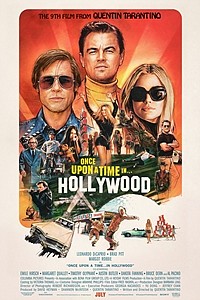 The studio rep at the screening asked that both audience and critics not provide any spoilers for this, Quentin Tarantino’s ninth film. But Tarantino himself tells you everything you need to know on the “what happens” front with the title: the fairy-tale formulation that pauses before telling you the setting. Not in Nazi Germany, as in Inglourious Basterds. Not in the slaving South, as in Django Unchained. But in Hollywood — specifically, 1969 Hollywood, just as the damn dirty hippies were arriving to upset the ailing industry’s apple cart. (Easy Rider was released a month before this film’s climax, and aging Western TV star Rick Dalton (Leonardo DeCaprio) goes so far as to call a trespasser on his private road “Dennis Hopper.”) Of course, movies weren’t all the hippies had on their mind: society at large was in for a reckoning, with all its glitz and glam serving to obscure its fundamental greed and bloodlust. (Just look at the subject matter of its preferred entertainment: crime and violence everywhere you turn your TV’s dial!) Tarantino has an eye for both the neon glories and the grotesque violence, and while it looks for one dizzying moment like he’s serious about pitting one against the other, in the end he wraps both in his loving cinematic embrace. Oh yes, the story: it so happens that Rick Dalton, however poor his career choices, has nailed it when it comes to real estate: he finds himself living next door to Roman Polanski, the hottest director in Hollywood, who is renting the place with his gorgeous wife, the actress Sharon Tate. Unluckily for them, however, the house used to belong to someone mixed up with a bearded weirdo named Charles Manson, the leader of a hippie commune situated on the site where Dalton and his stuntman Cliff Booth (Brad Pitt) used to make TV shows. Meandering but deliberate, gorgeous and garrulous, it is very much the writer-director doing what he does so well, but in very familiar fashion. Which brings up the intriguing possibility that in making a movie about movie making, his real subject here is himself.

Liked it right up until the violent climax. Not so much the violence, but the fact that a guy who may have killed his wife (the characters remind us he was found not guilty) would come off as likeable to the audience.