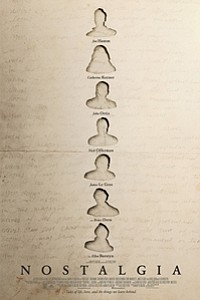 There have been movies named after feelings before — Contempt, Repulsion, Happiness, even Fear and Loathing (if only in Las Vegas) — but they tended to focus on the characters having those feelings. Here, director Mark Pellington seems to be aiming at a portrayal of nostalgia itself, with the people feeling it serving as necessary but ultimately unimportant vessels, the way a doctor researching cancer needs to see it working on a patient. The result is weirdly awful, much of it involving extended musings over stuff lost or left behind. Sample: “These are the remainders of our lives, of many forms — emotional, physical. These are our artifacts, our scars, our objects, memories, items that are tangible, memorable. We live our lives, and ask, ‘What do we leave behind? What’s the value of any of this?’” Well, okay then. Eventually, the film rustles up something approaching a story, and sharpens the pang of loss. It’s slightly more personal, but still baffling to behold — a campaign of sorrow in the service of…what? What’s most remarkable is the cast: Bruce Dern, Ellen Burstyn, John Hamm, Catherine Keener, Ron Offerman, Patton Oswalt, et alia. (Maybe they all liked writer Alex Ross Perry’s Queen of Earth as much as I did, and signed on before reading the script?) Hamm, at least, has a solid future reading people’s old letters aloud.