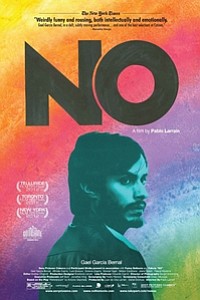 The final installment in director Pablo Larrain’s unplanned “Pinochet era” trilogy that began with Tony Manero in 2008 and includes 2010's Post Mortem. The fate of the Chilean people rests in the hands of Rene Saavedra (Gael Garcia Bernal), a soda pop–selling ad exec hired to quarterback the “No” campaign. Rene's job is to create twenty-seven 15-minute infomercials aimed at ousting Pinochet. His mission is to thwart the competition’s bid to turn the military dictator into an attractive product used to lure old women and young voters, the country’s two undecided demographics. Larrain works backward, choosing to conform his narrative to the existing footage by shooting the entire film on the antiquated three-quarter-inch cassette stock. In that sense, No could be the most beautiful, purposefully ugly film ever made. With Antonia Zegers, Larrain lifer Marcial Tagle, and the incomparable Alfredo Castro as Rene’s soda-swilling, Pinochet-pushing superior.