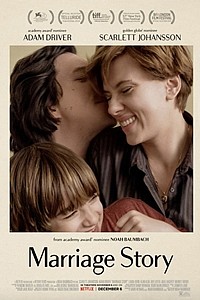 Nicole (Scarlett Johansson) is the type who will reflexively engage in conversation with the petitioner outside the Ralph’s supermarket, a nurturing soul who abandoned a potentially successful career in Hollywood to move East and work with her husband Charlie’s (Adam Driver) fledgling theatre company. Her star waned, he became the family’s top draw, and in no time, they’re lawyering up for divorce. Given the number of Awards voters whose marriages end in splitsville, films like this not only function as entertainment, they double as cheap, much needed audience therapy. That was certainly the case for Noah Baumbach, who patterned the film after his breakup with wife Jennifer Jason Leigh. (She’d have made a much better Nicole than Johansson.) As Johansson’s counsel, Laura Dern grabs the camera by the turret, painting the screen with swagger, even going so far as to call Charlie a “smart cookie.” That applies to the character, not Driver’s performance, his most rank and file work to date. We wait for Charlie to explode, which he does, as if on cue.