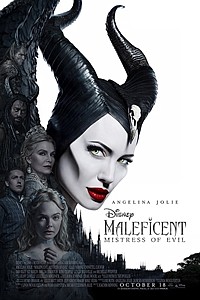 For a while, near the end, this is a surprisingly solid PG war movie, full of grand-scale spectacle, fraught intimate battles, multiple shifts and twists, and violence that manages to feel significant without also traumatizing the youngsters in the target audience. Neat trick, that. Before and after, however, it’s a draggy, garish mashup of romance and politics — those royal weddings did have their uses, I suppose — that leaves star Angelina Jolie out in the cold. And she is a star here: something amazing to behold, an Old Hollywood glamour shot come to…well, not exactly come to life, but mobile, anyway. Her waxen, angular visage is a blend of Gloria Swanson, Joan Crawford, and Marlene Dietrich, and the effect, taken together with her astonishing and fabulous wardrobe (that neckline of bird skulls!), is riveting. Alas, the same can’t be said for her character, a strange blend of outer quips and inner conflict as she tries to decide whether her love for human goddaughter Aurora (Elle Fanning) can be extended to the rest of marauding humanity. It’s a tough call, what with White Queen Michelle Pfeiffer stealing every scene through sheer campy villainy. There’s something sadly inspired in the notion of a fairy tale serving as a warmonger’s fake news, which makes Joachim Rønning’s effort here more of an underserved good idea than anything else.