Linda Ronstadt: The Sound of My Voice 2.0 stars 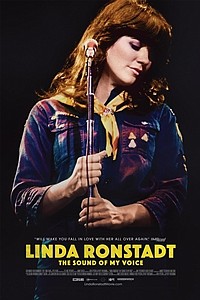 Linda Ronstadt was the first female artist to leave an otherwise male band hot on the heels of a hit to launch a solo career. A lyric from the Stone Poneys tune that put her on the map foreshadowed the key to her success: Ronstadt was not about to have the reigns pulled in on her. CNN Films could have taken a lesson from its subject by not pulling any punches. For a period, controversy dogged Ronstadt’s career. All but a few guarded minutes are apportioned off to her highly publicized relationship with Gov. Jerry Brown. Ronstadt, who famously nicknamed her then-boyfriend “Moonbeam,” sums it up with, “We had a really good time together.” Not wanting to deprive her fans a chance to see her in concert, Ronstadt decided in 1983 to play South Africa. The U.N. placed her name on a list of artists who supporting apartheid by performing there. Parkinson’s Disease has robbed the 73-year-old singer of her voice. We’re grateful that the cameras were rolling when director’s Rob Epstein and Jeffrey Friedman coaxed a tune out of her.