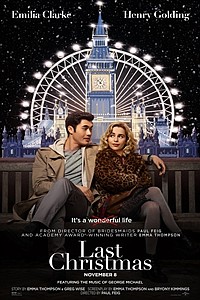 It’s a case of foreshadowing from the grave when the first line of George Michael’s titular tune provides the basic framework for an entire feature. Small screen enchantress Emilia Clarke teams with Henry Golding and Michelle Yeogh, stars of last year’s unexpected big screen sensation, Crazy Rich Asians, for romantic comedy with a heart… transplant. Kate (a raccoon-eyed Clarke) isn’t hiding from her Yugoslavian heritage so much as she’s trying to avoid a mother (Emma Thompson, who also produced and co-scripted) bent on foisting it down her throat. Now, her life as a Christmas store elf is about to take a turn for the metaphysical, thanks to the mysterious Golding. Any story — no matter how far fetched — can be done right, so long as it’s not placed in the wrong hands. Paul Feig (The Heat, Spy, Ghostbusters) directs, and once the plot’s supernatural component becomes apparent, it’s equally obvious that pulling it off with the requisite style and magic is not in his wheelhouse. Still, it’s worth a visit to the multiplex to behold cinematographer John Schwartzman (National Treasure: Book of Secrets, The Founder) accept the challenge of illuminating a feature almost entirely by Christmas lights.