The Kingdom of Dreams and Madness 2.0 stars 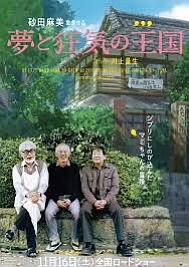 AKA The Rise and Fall of Studio Ghibli? Yeah, probably, at least if you listen to cofounder and chief director Hayao Miyazaki (Spirited Away, My Neighbor Totoro, Howl’s Moving Castle). “The future is clear,” he intones with an old man’s matter-of-factness as he smokes in the studio’s rooftop garden, “it’s going to fall apart.” And why not? Movies he says, mattered once, but now, “Is this not just a grand hobby? I’m done making movies. It’s futile now.” Besides, “The world is mostly rubbish,” and disaster is looming on the horizon. In this lovely and gently searching documentary, he and fellow cofounder Isao Takahata are both working on their final features (The Wind Rises and The Tale of the Princess Kaguya, respectively), though Miyazaki wonders aloud about whether his former mentor/creative partner still has what it takes to get the job done. (There’s no doubt about Miya-san, however: at 72, he remains a steady dynamo of activity, participating in every aspect of the film’s production. It’s hard to imagine what he’ll do with his retirement.) “Think I’m cruel?” he asks, smiling just a little. Actually, no. Just frank — and an old master’s frankness can be a positive delight. If you don’t enjoy the above bluntness and pessimism, you can always take comfort in his insight, his care, and even his compassion. (One of the film’s great high points is his reading of a letter to a man he met, very briefly, during a World War II air raid.) Whether or not moviemaking is futile, Miyazaki pours himself fully into his art, and it is both pleasure and privilege to watch it happen.