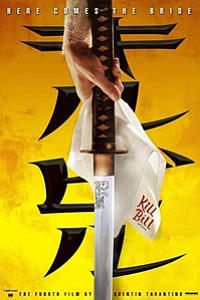 After a sizable step forward in his third film, Jackie Brown, and after a lengthy interval of six years since then, Quentin Tarantino takes several steps backwards in his fourth. An odd blend of pretension and triviality, it posits a comic-book world in which there can exist a Deadly Viper Assassination Squad, whose mostly female members have code names such as Cottonmouth, Copperhead, and Black Mamba (the black woman on the team envies that name, the way Mr. Pink in Reservoir Dogs envied everybody's name), and are trained in the gravity-defying martial arts of Hong Kong kung-fu fantasies and the blood-gushing swordplay of Japanese samurai epics. In such a world, the heroine (the long, lean, though not particularly lithe and athletic Uma Thurman) can have her hands full in a catfight with one of her sister Vipers ("C'mon, bitch! Bring it on!"), and then, as the need arises, can mow down scores of similarly trained assassins in quick succession, showing no ill effects in either instance of having gotten herself shot in the head and lying for four years in a coma, the sexual plaything of a night-shift hospital orderly ("My name is Buck, and I came here to fuck!"). It should already be apparent that the number of prospective moviegoers who will find this material interesting in itself, or as an hommage to a deserving genre or genres, will be severely restricted. In the words of one character, apropos of something roughly related: "If you was a moron, you could almost admire it." Split into parts, not by original design but purely as a practical matter (or in other words, an economic matter), after its dimensions grew unwieldy, it delivers a first installment of average length and unambitious scope, with no shape, no pace, no proper end, just a pause in the action. Lucy Liu, Vivica A. Fox, Daryl Hannah.