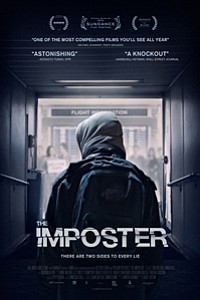 A talky talking-heads documentary, but one that spins a tale dizzying enough to keep the drama going (with a little help from old home video and dramatic re-enactment). When Nicholas Barclay was 13, he disappeared from the streets of San Antonio. Three and a half years later, his family gets a call telling them that he has turned up in Spain — his memory full of holes, his appearance drastically altered. The family wants to believe their son is back, and so they do. But we know better: in reality, this "Nicholas" is a 23-year-old Frenchman named Frederic Bourdin. A drifter who would rather be someone else, Bourdin seizes an improbable opportunity, and things just get more improbable from there. Director Bart Layton does a masterful job of shifting perspectives and keeping things appropriately off-balance, especially when dealing with the canny Bourdin. One moment, he's a wounded soul caught up in circumstances that are very nearly beyond his control; the next, he's a manipulative monster willing to exploit a family's grief for his own ends. Victim to villain, back and forth and back and forth again. But Layton is less successful when he attempts to pull a similar maneuver with Barclay's family. Their willingness to suspend disbelief may be baffling at times, but they're not mercurial. Bourdin's encounter with them is waves against cliffs, shifting tides against uncomprehending bedrock.