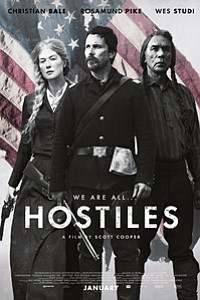 Director and co-writer Scott Cooper re-teams with his Out of the Furnace star Christian Bale to tell the story of Captain Joseph J. Blocker, a man of war facing a violent transition — physically and otherwise — to peacetime living. After a lifetime spent killing people because those were his orders, he is ordered to preserve the life of his bitterest enemy, an ailing Cheyenne who wants to die on his home turf and needs protection for the journey. To complicate matters, the caravan picks up a pioneer woman (Rosamund Pike) who has just endured the slaughter of her family by the natives. Bale nails the portrayal of Blocker’s cold hatred, a condition honed by experience, bound by a strict code, and tempered — perhaps in both senses — by a fierce intelligence and a tenacious faith. Throughout, a great deal is communicated even as very little is said, and much of it concerns the possibility of being human in inhuman circumstances. By turns deliberative and chaotic, brutal and merciful, definitely bleak and just maybe hopeful, Hostiles could have ended with its penultimate scene, but it would have been a very different movie.