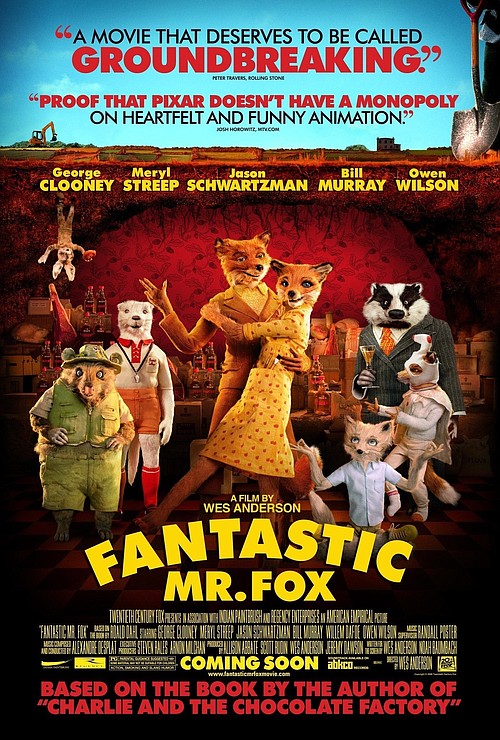 Wes Anderson’s wised-up children’s film, a labor-intensive stop-motion animated adaptation of the Roald Dahl animal tale (reportedly he never visited the London set, but directed from Paris by E-mail) about a vulpine sophisticate who moves up in the world — out of a hole and into a tree — but can’t escape his animal nature. (See him, for example, drop the act and rip into his food before regaining his composure: “Dinner was pitch-perfect.”) Though the droll result has its charms, such as the use of “cuss” as an all-purpose cussword, as in “I sure the cuss hope so,” it’s not so much for children as a group or adults as a group as it is specifically for devotees of Anderson, who is able to pursue with puppets and miniature sets his standard visual predilections: squared-up and flattened compositions, lateral action and tracking shots, a clump-clump editing rhythm. On the eclectic soundtrack (the Rolling Stones, the Beach Boys, the Wellingtons, Burl Ives), the director resorts to thievery from the film scores of Georges Delerue, like Scorsese in Casino, for the moments of peak emotion. With the voices of George Clooney, Meryl Streep, Jason Schwartzman, Eric Anderson, Bill Murray, Michael Gambon.

Fantastic Mr. Fox is an odd animated movie. Folks who grew up on the Rankin/Bass stop-motion holiday movies such as Rudolph the Red Nosed Reindeer, The Year Without a Santa Claus and The Little Drummer Boy will recall with fondness, the animation style. But some of the themes in the movie seemed a little weird and unclear. One theme appeared to be the idea that everyone is different and that it benefits society to encourage each individual’s strengths. The only problem, at least in this story, was that by engaging that notion, the characters got into more trouble than they had been in in the first place. Another theme appeared to be the concept that the animals (Fox, Beaver, Mole, Rat etc.) which are being compared to human personalities, have very specific natures, and when one tries to deviate from his or her true nature, problems arise. Only in this story, the opposite seems to have been proved. In other words, things go from bad to worse in this tale, which is contradictory to most fairy tales and children’s stories. Disregarding that and getting back to the animation, the stop-motion action is very well done, but what really enhanced the visual feel of this movie were the harvest gold/autumn/dusk colors in the background scenery. Most of the film appears bathed in perpetual sunset. The other feature that really made this movie interesting was the original music by Alexandre Desplat, which was at times melancholic, strange or exciting. The soundtrack is an oddball combination of tunes by The Beach Boys, Burl Ives, The Rolling Stones, Desplat, Art Tatum, Jarvis Cocker and a few others. Weird, yes, but effective. Some of the voice-overs in this movie didn’t work as well as they could have. George Clooney, as the voice of Mr. Fox was fine, but I think a British actor would have been a better choice. All of the human characters in the movie have British accents. The voice of Mr. Fox’s son, Ash, played by Jason Schwartzman, sounded like a snarky twenty-something adult instead of a child. And Meryl Streep, who voiced Mrs. Fox, had such a dull monotone that I didn’t even realize that it was her until I read the end credits. On the other hand, Bill Murray as Badger, Wallace Wolodarsky as Possum, and Willem Dafoe as Rat were excellent. One other oddity that stood out was a mysterious banjo playing character who was supposed to be the son of one of the human farmer characters. At one point, the farmer made some very disparaging comments toward him, which were never explained. I could only guess that the banjo player and the rude comments must have been some kind of inside joke by and for the film makers. Despite some really odd moments, this is a good movie, which it is targeted more toward baby boomer adults than kids. The imagery and the music make up for the weirdness.