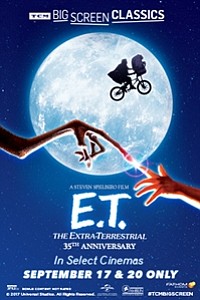 Nothing more ought to be required to dismiss Steven Spielberg's pretense of sweetness and innocence, or to dismiss the movie in toto from respectful consideration, than a glance at the death-scene of the monogrammatic spaceman. This sickroom spectacle is milked for all it is worth, with the normally cigar-colored creature having turned to the color of ash, his full-moon eyes narrowing to mere crescents, and the ten-year-old boy who has befriended him, and who is symbiotically wedded to him, at first wasting away in tandem, then regaining sufficient strength to wail in protest when the selfless little alien severs all ties. For cruelty to characters and audience alike, the expiration of E.T. bears comparison to Dickens's polishing-off of Little Nell. No one but a card-carrying masochist would want actually to carry out such a comparison, and, in any event, the relevance of the comparison is very soon squelched. For sheer manipulativeness, for utter shamelessness in pursuit of popular approval, Spielberg leaves Dickens choking in his exhaust when, once having shut E.T. away in his coffin, he arbitrarily brings him back to life again. The threshold of shamelessness is crossed over at many other points as well, particularly in Spielberg's courtship of the under-twelve viewer, or of any other viewer willing to switch off his brain in an effort to feel that young again. With Henry Thomas and Dee Wallace.