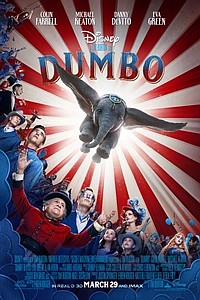 The artistry and emotion inherent in Walt Disney’s original is lost on goth babysitter Tim Burton’s pixelated pachyderm. Half the time, Dumbo stands around looking like a pair of soaked fireplace hand-bellows parked in a corner and left to dry. Burton’s decision to mute the animals and instead focus on a cast of overpriced actors was an elephantine blunder. Ain’t nobody got time for a widowed one-armed cowboy (Colin Farrell) and his soporific little ones (Nico Parker and Finley Hobbins) when there’s a flying baby elephant in the room. At almost twice the length of its glorious predecessor, Burton once again proves that the dirtiest words in his personal lexicography of cinema are pacing and structure. Scene after scene drags on long after its purpose has played out. Sadly, the PC police had their way here, so no drunken calfs. Crows on a wire are also verboten, but it’s okay for Ringmaster Danny DeVito to browbeat his marble-mouthed African-American strongman (Deobia Oparei). And with Mrs. Jumbo silenced, who better than the circus fat lady to sing “Baby Mine”? Disney’s flew. Burton’s blew. A more unnecessary (and awful) remake has yet to be made. Avoid this as one would a shit-dipped leper.