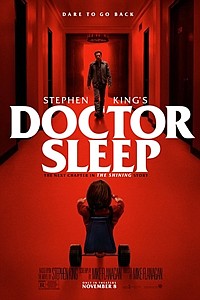 Stephen King introduces a group of RV-driving New Age vampires, led by a bolero-topped seductress who goes by the name Rose the Hat (Rebecca Ferguson). But rather than let his sustenance-seeking pseudo-family get blood under their fingernails, King has them vape the “shine” out of their victims. The cult lures small, shiny children with the promise of eternal youth, yet not one of the gang members looks a day under 40. This time the road to the Overlook is paved with a wealth of close-ups and celebrity lookalikes recruited to play the original cast members in flashback, none more famous than Ewan McGregor as the grown up Danny Torrance. The terminally unengaging trainspotter-turned-Star Wars-prop runs the emotional gamut from A to A- with yet another littler-than-life performance. Written and directed by Mike Flanagan. who seems like he’s on a quest to be faithful to both King’s novel and Kubrick’s film (which King despises), and who fails on both counts. With a running time of two-and-a-half hours, the only thing that kept me awake was the stethoscope-to-the-chest thumping that passes for a score.