Dawn of the Planet of the Apes 4.0 stars 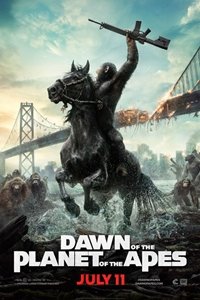 Rise of the Planet of the Apes alone justified the advent of CGI. With it comes a worthy successor. No other-worldly Hollywood actioner of recent vintage come close to playing by the rules of the robust fantasy universe it puts forth like this pair of premium summer blockbusters. It's been over a decade since ape last set sight on man, a situation that could have remained unchanged were it not for humankind’s natural inclination to engage in resource wars, this time against a society devoid of fuel. It has 25 long minutes on its predecessor and gosh only knows the motion-capture simians frequently out-emote their live-action counterparts. That said, my disbelief remained wilfully suspended throughout. Matt Reeves (Cloverfield) mercifully kicks his jiggle-cam to the curb and in its place gives us assured, rock steady direction – a long shot taken from inside a rotating tank turret as it surveys the wreckage made my goose pimples burble. Great inside joke: an orangutan named Maurice!

goose pimples burble? Is that good or bad? I'm new in town, you are an interesting critic.