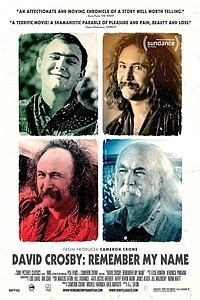 Thanks to the burden of memory, this viewer felt deeply despondent at the sight of a 76-year-old rock legend on the road and bellhopping his own luggage. And seeing him gazing at the ceiling, his head nestled between couch pillows, it’s hard to imagine David Crosby as one of the most reviled figures in the annals of rock. You’ll have to take his word for it, seeing as none of his former bandmates agreed to be interviewed for the movie. (Recent file footage finds Neil Young firmly stating “It’s never going to happen” before the interview can finish inquiring into the possibility of a CSNY reunion.) A second question arises, and it’s one that even the musician has difficulty answering: after years of drug abuse, why is David Crosby still alive? As per usual with these celebrity biodocs, audience satisfaction is best gauged by one’s appreciation for the subject matter, not the documentarian’s (in this case first timer A.J. Eaton) ability to wow the crowd with innovation (though Crosby’s backseat commentary makes a ride up Sunset Blvd. a delight). Everlasting takeaway: his father was Roger Corman’s regular cinematographer, Floyd Crosby.