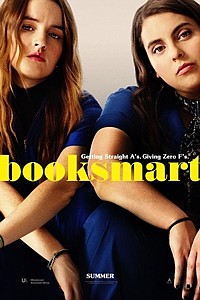 High school fantasy from director Olivia Wilde that takes care to hide its soft heart beneath a tough hide of sexy talk, modern mores, and somewhat subverted expectations. Taking the last part first: our heroines here are a couple of good girls (Kaitlyn Dever and Beanie Feldstein) who spent high school studying instead of partying, the better to secure a bright collegiate future. Imagine their surprise when they find that their more loose-living peers have similarly promising prospects, but didn’t waste high school banging the books. Time to make up for lost time by going to a graduation party the night before graduation, just so they can say they lived it up while they were still in high school! Dever and Feldstein’s friendship and chemistry provide the film with both its chief appeal and dramatic engine, and the winning pair make Booksmart a film that’s very easy to like. But it’s less easy to believe. In general, the kids don’t seem like kids. They don’t even seem like college kids. They seem like weirdly youthful adults, their wits not hormone-addled but razor sharp, their molten adolescent selves already cooled and tempered by wisdom and self-knowledge. Interpersonal dynamics get treated with sophisticated precision, regardless of emotional turmoil. Even the decision to cut loose reads more like a mid-life crisis than anything else — with the possible exception that the pair have still got time avoid certain consequences and responsibilities. Neither of which are much in evidence here. There’s no real fallout for anything; hence the charge of fantasy. But it's a fun ride all the same.