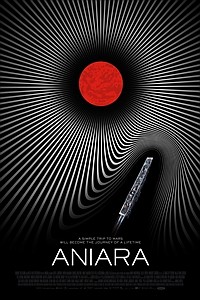 It was supposed to be a three-week jaunt to Mars aboard a transport ship: a floating erector set outfitted with deluxe accommodations, 21 restaurants, and an attraction known as Mima, a soothing rest-for-the-weary club room that administers emotional tuneups to uneasy colonists. But a collision with an asteroid knocks the cosmic liner astray, causing the craft to drift for what should have been no more than two years before finding a celestial body with enough magnetic pull to set it back on course. That’s nothing compared to the 60 years (and a prevailing interest in global warming) it took for Swedish Nobel laureate Harry Martinsson’s epic poem of an ill-starred starcruiser to make it to the movies. The characters and their situations are regularly overshadowed by the film’s team of effects technicians and designers, whose contributions are exemplars of brilliance on a budget. And when was the last time an intertitle copped the biggest laugh in a movie? Newcomers Pella Kågerman and Hugo Lilja direct and Emelie Jonsson stars.