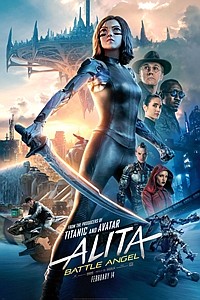 Why did Robert Rodriguez bother giving Rosa Salazar the CG Margaret Keane treatment when Hollywood already had tumescently-eyed young actresses like Anya Taylor-Joy or Bel Powley eager to report for duty? It’s Ex Machina for teenagers when a futuristic sawbones (Christoph Waltz in cruise control) fuses together the upper-torso of a trashed replacement cyborg with the robotic bottom half of his dead daughter to form a lean, mean, metallic-sheened fighting machine. (According to contemporary comic book thinking, the only way a woman can become a man’s equal is if she learns to brawl like one.) The only thing flatter than the dialogue are the 3D effects, topped by a time consuming riff on Rollerball. If you relish spending two hours trapped inside a video game without a controller, knock yourself out. From where I sat, it was an endurance test, an exercise in facing forward and staring at a screen. With: Jennifer Connelly, standing around and looking severe, and a ready-made performance from Mahershala Ali as the blue-eyed villain that’s just bad enough to invalidate this year’s Oscar chances.