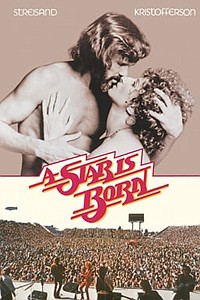 The twice-told (first by William Wellman in 1937, second by George Cukor in 1954) fame-and-heartbreak tale is told once more, minus the fundamental narrative facility of the earlier versions. The rising star's ravenous ambition and the falling star's sensitive ego are established so negligently that the ensuing spectacle of love, anguish, and sacrifice makes very little sense. The circus-y rock music milieu is done passably well, but the movie retains plenty of old Hollywood clichés about the music-making art (she picks out a little melody on a piano, and he, hearing it for the first time, immediately chimes in with off-the-cuff lyrics). Kris Kristofferson struggles manfully with the voice-straining musical arrangements and the cuddly stuff with his overbearing co-star, Barbra Streisand; and he emerges, unbruised, as one of the eminent sex symbols of his day. Streisand, her Jon Peters hairdo sitting atop her head like a lampshade, her lips writhing with a wormlike life of their own, has a more arcane appeal. Directed by Frank Pierson.