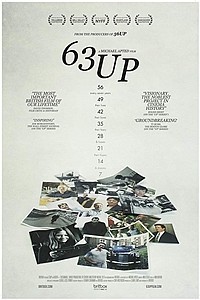 The lives of fourteen subjects are observed staring at age seven and followed by incremental updates every seven years. What was originally intended as a one-off documentary on the British class system for the topical news series is now in its ninth installment. There were many characters that I grew up watching, but few that I literally grew up with. Michael Apted’s Up series has emerged as the world’s first and longest-running reality television show. The 56 years after its inception find the show alive and well, with the latest installment still managing to find a theatrical playdate. The series stands as one of cinema’s greatest achievements, a use of the medium that’s at once blatantly logical and profoundly affecting. What’s new? Alas death, as it must to all continuing works of genius, finally caught up with Up. Lynn, the first participant in the series to die, passed away one year after the release of 56 Up. It was so much more fun when they… we were young.