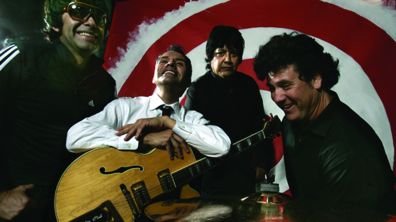 The Zeros, aka "the Mexican Ramones," formed in Chula Vista in 1976, debuting at a dance in Rosarito, Mexico. Their first major gig was the following year in Los Angeles at the Orpheum Theater. That show was opened by the Germs, and the Weirdos headlined. The Zeros' first record was a vinyl single, "Wimp," b/w "Don't Push Me Around," released by Bomp Records in 1977.

They would go on to play venues such as The Masque, Whisky Au Go-Go, and the Starwood in L.A.; San Francisco's Mabuhay Gardens, Deaf Club, and Temple Beautiful; and Max's Kansas City in New York. "The Zeros played CBGB's in May of 1980," says Hector Penalosa. "On a Tuesday night. Maybe five people were there, but hey, we got to play CBGBs!"

The Zeros' songs have also been covered by Los Angeles bands Wednesday Week ("They Say That Everything's Alright"), the Muffs ("Beat Your Heart Out"), Hoodoo Gurus, Mudhoney, and Sator, whose cover of "Black and White" went to number two on the Swedish charts.

The Zeros themselves were known for offbeat covers, including a B-side featuring the Righteous Brothers tune "Little Latin Lupe Lu" (best known as a Mitch Ryder track).

The Zeros' guitarist/singer Robert Lopez would later gain fame as "El Vez, the Mexican Elvis." Many El Vez bios, as well as several online articles and bios about the Zeros, claim he and the band are from L.A. When they broke up, Lopez had already quit to join the band Catholic Discipline, and the rest of the band's move to San Francisco failed to reignite the group. Various partial reunions took place, including 1992 recording sessions.

Lopez added to the confusion with his "East L.A. is my hometown" stage banter that sets up "En El Barrio," a Chicano-ized rewrite of Presley's "In the Ghetto." One doctored song where Lopez as El Vez gets autobiographically real, however, was highlighted throughout his "Merry Mex-Mas" national tour that concluded at the Casbah in late 2006: "I'm dreaming of a Brown Christmas / Just like my ones in San Diego / Where cousins and familia are tight / And thank God our Christmases ain't white...."

In 2007, Squiddo frontwoman Maren Parusel formed an all-girl Zeros tribute band, Wild Weekend, with singer Kelly Alvarez, Melissa (drums) and Kaitlin (bassist for the Atoms). The band was later male-infiltrated, and then they split as Parusel launched a solo career.

Javier Escovedo and his brother Alejandro co-fronted the Texas-based ’80s band he True Believers, whose eponymous debut album was produced by legendary Memphis session player and producer Jim Dickinson, who passed away in August 2009. “He just had a good warm vibe about him but also a tough, seen-it-all vibe, too,” recalls Javier Escovedo.

“He played piano on a few songs, [but] we were known as this big three-guitar army…so he didn’t want to mess with that too much.… I dug him.… I had always hoped we could work together again. [And] he got one of our songs onto the Blue City movie soundtrack. It’s mainly…Ry Cooder songs except for a Johnny Cash song and a Javier Escovedo song [True Believers’ “Marianne”]. Very cool. And he made it happen.”

Until 2009, Zeros bassist/singer Hector Penalosa (Squiddo) declined to take part in most Zeros' reunions. In a Reader interview, he accused guitarist Javier Escovedo of "stepping over people...just because he can get money out of it, because some people will pay good money for the Zeros."

Penalosa said he took part in some 1999 Zeros' recordings, but that only Javier Escovedo got paid. "[Other band members] didn't get diddly-squat," according to Penalosa.

In response to Penalosa's accusation, Escovedo said at the time "It's a set of circumstances that I can't talk about...A certain amount of money that was expected was not earned, didn't come into the band."

One-time Zeros bassist Guy Lopez died October 2, 2007, at the age of 42 - he'd also played with the Upbeats. As of 2009, Hector Penalosa was playing with Squiddo.

In September 2009, the band picked up a Lifetime Achievement nod at the San Diego Music Awards. For the ceremony, they were joined onstage by Wayne Kramer of MC5 for a rendition of "Ramblin' Rose," and video testimonials to them included good words from Joan Jett and John Doe of X.

The UK's Domino Records included two songs by The Zeros on a Jon Savage Compilation of the Best of American Punk Rock, and Brooklyn based Last Laugh Records released two singles by the Zeros in 2012.

As of 2012, the band is signed to Panache Booking. That summer, armed with an arsenal of covers and a few dozen classics, the Zeros embarked on a series of dates with frontman Javier Escovedo’s younger brother Mario (the Dragons) on second guitar (replacing original guitarist Robert Lopez, who performs an ongoing theater gig in Seattle as El Vez, the Mexican Elvis).

On their return to San Diego, they announced that they’re recording a new full-length of covers, including cuts from the Velvet Underground, Bo Diddley, and the Standells, along with some new and old originals.

When the Zeros played the September 2014 San Diego Music Thing, the lineup featured Javier Escovedo on guitar and lead vocals, Hector Penalosa on bass, Baba Chenelle on drums, and Victor Penalosa on guitar (Robert Lopez, aka El Vez, was MIA).

In May 2015, Victor Penaloa drummed for the Flamin' Groovies on a North American tour featuring the band's 1971-1980 members Cyril Jordan, Chris Wilson, and George Alexander. He later became a permanent band member.

Autumn 2019 found the band announcing new music on the horizon, as they reissued their classic single "Don't Push Me Around" in an autographed starburst vinyl pressing with an original insert, released by Bomp Records. A new Zeros single was released in late 2019 on Munster Records in Madrid, "In the Spotlight," with a video filmed and edited by Kelly Paige Standard and David Robles.