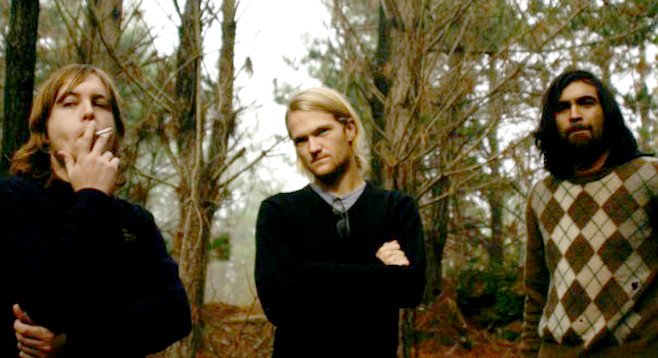 Founded by singer/guitarist Brian Warren, Weatherbox is a progressive pop-punk band, whose deep-reaching lyrics deal with existential matters uncommon in most rock and roll. Several members have also played in the side-project Mister Valentine. They released American Art in 2007, and Say Anything's 2008 tour included Weatherbox as openers.

Their album The Cosmic Drama was released in 2009, (Doghouse Records), followed in 2010 by the Christpuncher 7-inch, recorded and engineered by Ben Moore (Soft Pack).

In 2011, they recorded a Daytrotter session (streaming online), performing “Broken Glow Sticks” from Christpuncher, “Contactus, the Little Green Man” and “No Hands (Anything That Moves)” from The Cosmic Drama, and “The Clearing” and “Trippin’ The Life Fantastic” from American Art.

When guitarist George Pritzker went on to co-found the band Japandi, Brian Warren was the only founding member remaining in Weatherbox. Topshelf Records reissued the band's 2009 LP The Cosmic Drama, (originally released on Doghouse Records) on September 18, 2015, featuring alternate and EP tracks. To promote the reissue, a never-before-released alternate version of their song, "They're Ready For Us To Come Home," was released.

As of late 2015, Weatherbox (Brian Warren, Scott Szikla, AJ Peacox, and Nick Brumme) was working on a new album planned for released the following spring. However, they split in 2016. Brian Warren joined Future Crooks and then, with Shane Moylan and Jordan Krimston, formed Miss New Buddha in 2017.

Returning from hiatus in 2019, they released a song recorded live in studio for Half Way Home earlier this year, "A Band Astride Clouds," with a handful of shows including a November 1 appearance at Soda Bar's 10th Anniversary Celebration.