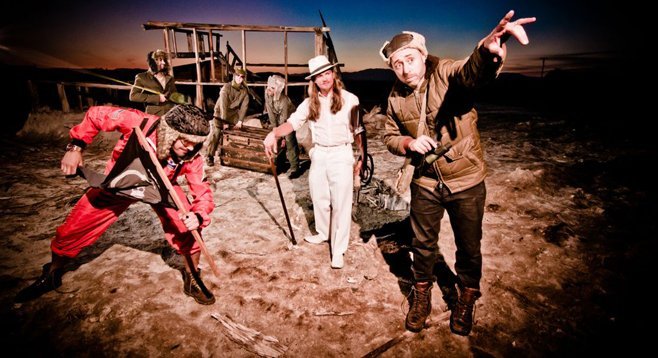 Based in Pacific Beach, Vokab Kompany is a hip-hop, soul, and electro act that performs with a live backing band, usually with around five to seven musicians. Founder and co-producer Rob Hurt (aka Robbie Gallo) spent his teen years near Lake Tahoe, where he first teamed up with Matt “Burkey” Burke, singer/MC of Native Root. They were soon joined by vocalist/guitarist Billie Gallo and keyboardist/producer Geoff Nigl.

In 2009, the group was nominated Best Hip-Hop at the San Diego Music Awards, and they appeared on the Best of Daygo local hip-hop compilation album. After releasing the album New Kong, they were a featured act on the international networking site perfspot.com. The record won Best Hip-Hop Album at the 2010 SDMAs.

Burkey, a former high school English teacher, reveals a hitherto unknown secret behind two celeb performers not credited on New Kong. “We met the bassist and guitarist for Cage the Elephant, Daniel Tichenor and Lincoln Parish, when we all played the Stay Classy event at Petco Park last year, and they came to our studio in National City.” The result was a new song and overdubs on a Vokab track featuring the rising alterna-rock stars.

“However,” according to Burkey, “Sony had issues with them releasing anything before the new Cage the Elephant album drops, so we needed a pseudonym on our album. The alias we came up with for them is ‘Thumper Oakstreet.’ Bummer, a big corporation trying to ice our big-name guest stars.”

Also in 2010, their song “So Bright” was featured in KIA Summer Sales Event national commercial and an Al Roker segment on the Today Show.

The band took home a Best Hip-Hop trophy at the 2011 San Diego Music Awards. Violinist Spencer Sharpe got married to Elena Escamilla on September 24, and England’s Prince Harry caught their act when he dropped by the Belly Up on October 15. Karl Denson’s Tiny Universe were also on the bill.

In early 2012, the band Love and Light recorded the Vokab track “Know Me Now,” available as a free download on SoundCloud and BandCamp. Around the same time, they signed a management deal with Michael Burnett, who also manages Iration, and began working on a new full-length with Crush Effect.

“Let It Fly (Solovox Mix)” feat. the Grouch, Souleye, Main Flow, and Apaulo 8 was released in May 2012. That August, the band won Best Hip-Hop at the San Diego Music Awards, and then they released a new version of one of Burke's earliest tracks, "Paint the Sky," produced by Anomatron, mixed and mastered by Tom Gordon (Inspired Amateur Productions), with co-production by Ben Cooper and Vokab Kompany, and featuring K-Doll vocals written by Nava Cooper.

"I ended up making a trip to LA to visit Reno native Mikey Gardner, aka MGenius, aka Anomatron to record my first song," says Burke of "Paint the Sky." "Eleven years later, Black Rock City on the Playa we reconnected. Then mutual friends brought us full circle at one of our Reno shows in 2012. Anomatron's remix of long time friend and old music connect, K-Doll's track had me and Robbie Hurts ears abuzz for weeks and jonesing to recreate."

Recording commercial jingles has become another good way for the six guys in Vokab Kompany to help pay their bills. In 2012, Vokab was one of five local artists asked to record a 60-second spot for “Movin’ and Groovin,’” a TV and radio ad campaign created and paid for by the Metro Transit System (MTS) to get San Diegans to appreciate public transportation.

Vokab Kompany, Buck-O-Nine, the Kneehighs, Ron Fountenberry, and Todo Mundo were each paid a flat fee of $1500 for their jingle, and MTS has the rights to each jingle for three years.

A collaborative album by Vokab Kompany and Crush Effect, VKCE, was released December 18, 2012, preceded by a single and video for the song “Don’t Owe You.” “Ya never know what kinda music you’ll hear when you hop in my car,” says Robbie Gallo. “We’ve blended styles of hip-hop, electronic, soul, pop, and bits of funk, giving our friends and fans music you can drive, dance, and get fly to.”

Says Burke, “It’s hip-hop. It’s electronic. It’s indie. It’s a shout-out to the past, and a taste of the future.”

In early 2013, a new Kia Motors commercial included their song “Back to the Past,” from a collaborative album with Crush Effect called VKCE, featuring Blake Griffin traveling to the past to visit his younger self. That Autumn, they shot a video for “Where's My DeLorean?,” spoofing Back to the Future. Says the band, “This is our stab at the concept in audible form along with a video to boot as George and Marty frantically scout through the streets of San Diego in an effort to track down their DeLorean time machine.”

The Do Lab's 2014 Coachella stage lineup for weekend one (April 11 - 13) included Vokab Kompany & Crush Effect, along with ill-esha and others. At the time, the group was recording with producers Kind David (Lupe Fiasco), Stephan Jacobs, and keyboardist/synth player, Geoff Nigl, who promised “Bad-ass horns from our homies over at the March Forth Marching Band, and [we] are tying up some other awesome collabs, including a track with Canadian producer Knight Riderz featuring Siya of Oxygen Media Network's T.I.-produced Sisterhood of Hip-Hop.”

2015 saw them onstage with Karl Denson's Tiny Universe for the Run DMC Remixed show (from Brooklyn to Jazzfest New Orleans and everywhere in between), and one of their songs was heard in the trailer for the Sacha Baron Cohen film The Brothers Grimsby.

Vokab Kompany's January 2016 release, the Good Kompany Album, spun off multiple singles, including "View of My Life" (for which a video was produced), and "Bang Bang" (produced by Amp Live). The album also features Mitchy Slick, Gift of Gab, and SIYA from Oxygen networks Sisterhood of Hip-Hop.

A three-song EP dropped on Fathers Day 2018, One Of Infinity, featuring "All original concepts by the late great Casey Maloney & Burgundy Morgan, re-visioned and tracked by Geoff Nigl, Burkey Vokab and Robbie Gallo aka B3K," according to the band.

Fathers Day 2019 saw the release of Eternal, a tribute to the late Casey Darrell Maloney, known from the Burning Man community and half of the duo Primal Energy. "Vokab Kompany incorporated Casey’s voice and instrumentals to create new tracks that would make Casey proud, with special thanks to Geoff Nigl and John Avery," says the band of the EP, which features three new songs produced by Cloudchord (Derek Vanscoten).

In July 2019, Rob Hurt aka B3K dropped a solo single, "Bad Better Best," with a video shot and edited by Enrique Vega, previewing his upcoming album I Can B Anything. Arranged at Jay Wat Production Studio and mixed by Gabe Lehner, aka 9 Theory, the track was produced by Justin Brown and features bass by Richard Galiguis and guest vocals from Rachel Sink Lindsay.