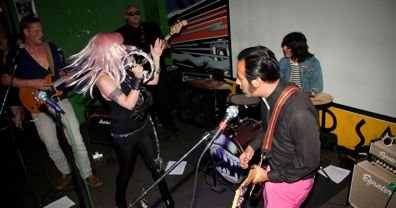 The band writes songs about funny haircuts, lost loves, nights of lust, waking up in strange beds, and staring at ceilings.

The Unruly Bangs began in 2008 as a jam session in the upstairs office space of an El Cajon industrial rubber factory. The original lineup included Bazinet, Darla Tucker on drums, Neil Revenga on lead guitar, and Carl Froelich on guitar. After their first gig at the Radio Room, Zeroes bassist Hector Penalosa offered to play with the Bangs, and they were off and running.