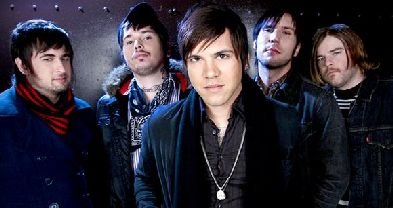 Influences: The Misfits, MxPx, Atreyu, the Cult, OK Go, One Republic, the Roots

The Stranger's Six guitarist Luke Johnson said his three-year-old local band didn't have to lift a telephone to get on MTV2. "They contacted us...they were following how many hits we got on purevolume.com. That and MySpace.com." Based on their song download volume ("We've been averaging 300 hits a day"), Johnson said a four-man production crew hired by MTV2 came to town in May 2006 to record a day in the life of the Stranger's Six. The footage was shot for an episode of a series called On the Rise, which exposed bands that appeared to be breaking out.

"They said they wanted to do a piece on a handful of San Diego bands. I heard Accident Experiment, My American Heart, and Black Heart Procession are on it too. They shot us in our practice studio and eating lunch at Antonelli's in El Cajon. We then went to 91X, and they interviewed us with [DJ] Marco Collins. The last place was at Soma. That was the first place we ever played. We got booked there before we even had a band. Me and [lead singer] Aaron [Thompson] had a demo, and that got us booked. We had a month to get a band together." The TV show aired in July 2006.

In the past few years, the Stranger's Six has played over 200 U.S. cities, guesses singer Aaron Thompson.

"We've toured all over the West Coast five times already...we had a '92 Dodge van. Once a week, it would die on the freeway; it would cut out cold. The power steering would cut out, and we'd have to pull over to the shoulder and hope we wouldn't get hit by another car. We'd have to wait ten minutes, and usually it would start again."

Thompson says his band's unreleased record (produced by Sean O'Donnell of Reeve Oliver) has already helped their van situation because it attracted the attention of Orange Peal Records, a San Jose label. In spite of the dismal state of the record industry, Thompson says Orange Peal is solid enough not only to reimburse the band for studio costs, but the label helped buy them a replacement van.

He says the Orange Peal hookup came about "after one of the guys from the label saw us at a show at House of Blues. [Orange Peal] has good national distribution." The label released A Date with Daylight in May 2007.

Glen Schwartz, director of A&R for Orange Peal, says indie labels aren't feeling the sales pinch as much as major labels are.

"We haven't been as affected [by music downloading]. The only thing that hurt us was Tower Records closing. They were really starting to support indie labels. But larger chains like the Best Buys and the FYEs are starting to buy from indies."

The Stranger's Six were nominated by the San Diego Music Awards as "Best Punk Band" for three years in a row. They appeared on the 2005 Warped Tour, and singles from their newest record, A Date with Daylight, have been spun on 91X, as well as on college and indie stations nationwide.