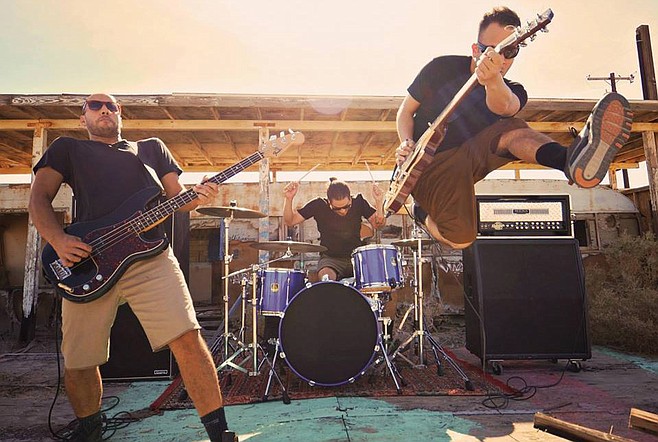 Based in Ocean Beach, Sameland was formed in late 2016 by Fernando Nepo, Diogo Figueiredo, and Rafa Scatolin (No Kings), all of whom grew up in Sao Paulo and had been living in California for around ten years. "The history between the trio starts back in Brazil, when the three of us used to play in different bands but shared the stage once in a while," says Nepo. "That bond would later become the spark that originated the band. Sameland is the representation of our voices and beliefs, a constant fight for equality and humanity, and the true joy of doing what you really like."

Their album Set In Motion was released in January 2018, mixed and mastered by Gab Scatolin at Mug Studio in Sao Paulo, Brazil, who also produced Rafa Scatolin's other band No Kings. The album was preceded by a single for "No Escape," for which a video was shot featuring the band rocking out in the desert amid dilapidated buildings covered in graffiti, with members seen in gas masks while someone in a ski mask prowls around the scrub brush and abandoned cars.

“We shot at the Salton Sea beach,” says Nepo. "The deterioration status of the place was the perfect fit for our purpose, since ‘No Escape’ talks about the need of voicing out our opinions, issues, and concerns before it’s too late.”