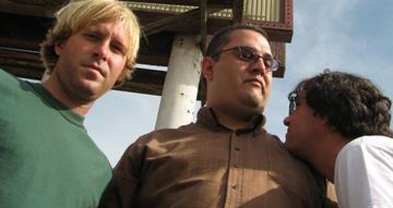 Sound description: Alt-country, power-pop, indie rock and roll, with a focus on melody and more than a few humorous/ironic lyrics.

“Rockaltcountryindiepopcatchycore” is the word singer/guitarist Adam Gimbel has coined to describe the music of Rookie Card. “I'd rather be unfocused than play the same song ten times in a row,” he says.

Despite their name, Boston-born Gimbel is the only bandmember who actually has a baseball card collection. “I bought a Beckett [Baseball Card] Monthly price guide a few years ago to check current prices and see which of my thousands of cards were worth keeping. Not many; 1974 Mike Schmidt and Rickey Henderson rookie cards are worth a lot less than they were when I was a kid. Thanks for reminding me.”

The band is rounded out by former Virginian Andrew McNally (drums) and guitarist Dylan Martinez, ex of Broken Dial Radio and Static Halo.

Rookie Card’s debut album Near Mint, released in 2004, included the Leap Year anthem “2/29,” which had originally appeared on a 2002 demo EP. “I wasn’t born on February 29, and I’d never met anyone who was when I wrote it,” says Gimbel. “But, I thought it might be kinda sad to be born on leap year and wondered if it might make someone sad for their whole life...if you think it’s rough being born near Christmas, try coming out on a day that doesn’t exist three years out of four.”

“I’m aging faster at a quarter of the speed/ my will to live don’t have a lifetime guarantee/ I wanna leap off the deep end/ I hope I fall on a weekend.”

“The song got mentioned in a syndicated leap-year news story that resulted in articles nationwide,” says Gimbel. “In 2008, Dylan [Martinez of Rookie Card] and I filmed ourselves performing the song and uploaded it to YouTube.” The clip was viewed around 10,000 times during its first week online.

“When Rookie Card first started doing the song, I’d ask if anyone in the audience was born on February 29. It took two and a half years before a leap-year baby actually showed up!” Gimbel also plays in the offbeat cover band Cover Me Badd.

Beginning in 2007, the band remained mostly inactive for around five years. “It was hard to motivate to get restarted, so we just never bothered. I got busy with other fun things [Cover Me Badd] that were much easier to get people interested in, so I let that happen for a while.”

Rookie Card did do a short February 2008 set during a local music trivia event at the Whistle Stop. On January 17, 2011, they got together again to perform Wilco’s 1995 album A.M. at the Casbah. They performed their first all-original set in nearly five years on February 29, 2012, at the Riviera Supper Club and Turquoise Room.