Rocket from the Crypt 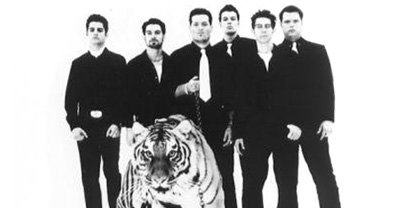 Influences: Pitchfork, Rocket from the Tombs, No Knife, Drive Like Jehu, Tanner, Back Off Cupids

Meanwhile, the band made an offer to fans: anyone who shows up at their gigs with an RFTC tattoo gets in free. A lot of people took the band up on this over the next dozen years.

Their mid-to-late-'90s albums Scream, Dracula, Scream! earned them national acclaim, though sales were not high enough to keep Interscope from ignoring the band. RFTC ended up quitting the label.

In the wake of their label troubles, drummer Atom Willard left the group, and it remained inactive from 1999 through 2000. Reis had already formed Hot Snakes and the Sultans and launched his own label, Swami Records, when RFTC signed with Vagrant Records and recruited a new drummer, Ruby Mars. They had a few other records released before deciding to disband in 2005. They played a sold-out farewell show on Halloween 2005 at the Casbah.

Asked in May 2008 if he misses the Crypt, Reis told MyFoxKC.com "I do have a little regret in that now that we don’t play together I don’t see those guys anymore. JC2000 moved to Belize, Apollo 9 is a schoolteacher, Petey X is doing merchandising for tons of bands, [my new band] the Night Marchers included. N.D. I still see quite often, and Mario owns an amazing record store in San Diego called Thirsty Moon."

Rocket From The Crypt is still putting out records, such as the All Systems Go series on Vagrant Records. Volume 3, released in August 2008, features 20 "lost master" 8-track demos recorded in San Diego. "It's violent, aggressive and thuggish stuff," says Reis, "and to me sounds much better now in retrospect than when we originally were recording these demos. I am really psyched about it. Thematically, musically, etc., it's all very period to an undocumented part of the bands history. I hope you take it for what it is and enjoy it on that level. I really believe if the band was still around, we would make a record at least sonically similar to ASG 3."

All Systems Go III features 20 tracks that were recorded on a Tascam 8-Track tape machine in the Rocket From The Crypt practice space, aka Manville, aka Drag Racist Studio, between 1997 and 2000. Reis believes that "despite the miscues, clams, muck-ups, bloopers, etc. inherent on this disc, this is the RFTC recording for today."

Now that Reis is in the Night Marchers, do fans with RFTC tattoos still get in free? "Uh, no. Sorry! It’s a different band, I reshuffled the deck. He gets a big high-five."

Their reunion performance of “He’s a Chef” on the childrens TV show Yo Gabba Gabba! will be released as a 7-inch single by the program and Volcom Clothing, b/w a Biz Markie and Wayne Coyne production. The performance is streaming on Volcom’s YouTube channel and will air on Nickelodeon’s Nick Jr.

In early 2013, new band projects were announced, including a tour of the UK and Europe in April, and the group played an unannounced surprise Easter Sunday concert at Bar Pink. They followed up in June with a performance at the two-day Orion Music + More festival created by headliners Metallica at Belle Isle in Detroit. Other acts included Red Hot Chili Peppers, Rise Against, Deftones, Dropkick Murphys, Gogol Bordello, and an Infectious Grooves reunion.

Their 2013 reunion appearances continued at Chicago's Riot Fest September 13 through 15 and also featuring blink 182, and an October 31 Halloween show at downtown's House of Blues with Creepy Creeps, Mrs. Magician, DeadBolt, and Beehive & the Barracudas.

They released a limited-edition vinyl single on each night of their subsequent UK tour, covering tracks by bands from each city like Status Quo, the Buzzcocks, Venom, Gerry Rafferty, Red Lorry Yellow Lorry, and the Boomtown Rats. Each night, one single-sided seven-inch disc was made available at their merchandise stall, many featuring San Diego guest players such as Ben Moore and Joe Guevara.

Though most of the singles had surfaced online as MP3s within a week of the shows, collectors were already paying up to 50 bucks apiece for vinyl editions such as “My Blues Away” (Boomtown Rats), “Shy Fly” (Status Quo), “Baker Street” (Gerry Rafferty), “Love Is Lies” (Buzzcocks), “In League with Satan” (Venom), and Red Lorry Yellow Lorry’s “Spinning Round.”

The February 2014 issue of UK's Mojo Magazine (#243) includes a full page review of the band's performance in London.

A reunion performance was announced for Tenacious D's Festival Supreme on October 10, 2015, at L.A.'s Shrine Expo Hall, for a bill that also included Die Antwoord, Dan Deacon, Andrew W.K., the Darkness, and Big Freedia. The occasional reunions continued into 2016, though their appearance at the April 2016 All Tomorrow's Parties was cancelled, along with the entire festival.

Rocket From the Crypt embarked on a 10-day European tour on November 30, 2017, along with local tourmates the Schizophonics.