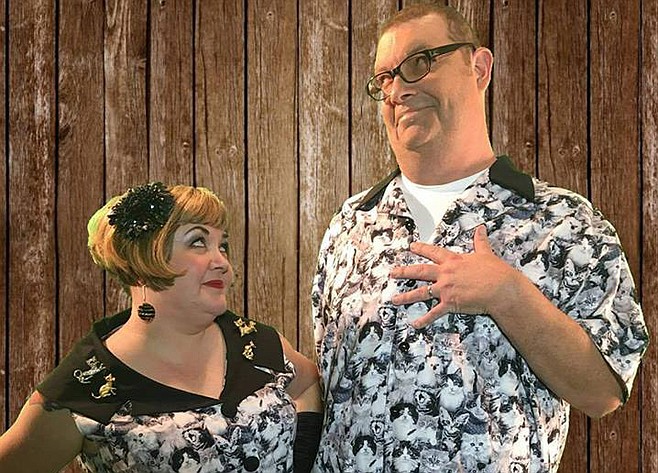 Let Me Tell You 'Bout My Bike

San Diego has a long tradition of comedic music, from Frank Zappa and his protégé Wild Man Fischer to the Rugburns (“Hitchhiker Joe”), the Beat Farmers (“Happy Boy”), the Bugs (“Dave Navarro’s Goatee Fucking Sucks”), Grammatical B (“Don’t Ask Don’t Intel”), and “the Mexican Elvis” El Vez, as well as José Sinatra, Adam Gimbel, and Mojo Nixon, whose comedic cut “Stuffin’ Martha’s Muffin” got him banned from MTV for singing about one of their VeeJay’s vajayjay.

‘We perform musical comedy inspired by burlesque, vaudeville, and punk rock,” says Jaye, who cofounded Pony Death Ride with her husband Joe in 2009. “As a multi-instrumental duo, our songs reference a variety of music genres, from classic American songbook–style to pop, country, electro, metal, and even children’s lullabies. Though our lyrics touch on various inappropriate adult-oriented themes.”

“Pony Death Ride is going to be pretty theatrical once we’ve got all the pieces put together, with costumes, props, semi-scripted comic banter,” said Jaye in early 2010. “It’s going to be a slow and expensive process, but at least we’ve got a couple of recordings under our belts now. I’ve got a lot of work to do to improve my singing-while-playing ability, but at least that’s not necessary in the recording studio. Based on the current state of the live music scene in San Diego, we plan to play mainly out-of-town in places like L.A. and S.F., where they have regular variety/burlesque/vaudeville type shows, maybe some open mic comedy shows as well.”

Jaye (“I moved here from Brooklyn in 2003 to get my master’s degree in public history at USD and to live closer to my grandparents”) cites a few of their inspirations. “I’m from Canada, so most of my influences are funny underground Canadian bands from the 1980s, like the Dick Van Dykes, Deja Voodoo, the Gruesomes, and the Flunkees, a sleazy punk Monkees cover band from Vancouver. I like the subversive stuff, so the more commercial novelty-type artists like Weird Al have never done much for me. Plus, I could never get over Weird Al’s hair. I just don’t like it.”

As for Joe (“I was born here, but I’m sure one day I’ll move on”), he says “I’ve been friends with Steve Poltz and a fan of Mojo Nixon for a long time, [and] my last two bands had the same mindset as those two musicians. I used to listen to KGB’s Homegrown albums, and one song called ‘Chula Vista,’ which is where I’m from, got me interested in this type of comedy-driven music. ‘King Tut,’ by Steve Martin, was also one of the first funny songs that I liked as a kid.”

Their single “Breakin’ Up With You Is Gonna Be Fun,” recorded at Earthling Studio, debuted on the band’s website in January 2011. A month later (February 15), they were named Unsigned Artist of the Week by The Comedy Point, a radio show out of New Jersey/Philadelphia.

A new track “Pony Death Ride Theme(s)” uploaded to their website in early March 2011, recorded at Earthling Studios, features two different songs mashed together. “We both sat down to write our theme song, and apparently had different ideas of how it should go,” says the band, who invite voting as to which song segment is superior.

Says Jaye, “I was finally able to break out my heavy metal riffs!”

Joe MacAskill has been a special education teacher for over a dozen years. The duo embarked on a road tour in 2011 that started at 3Clubs in Hollywood on April 4, wrapping up at the Hubba Hubba Review burlesque show in Oakland on April 11.

The June 20, 2011 season premier of the TV show Hoarders featured Jaye MacAskill’s cousin in Georgia, attempting to dispose of a gigantic collection of dolls and stuffed animals.

They played their second hometown show at Eleven on October 29, 2011, with Barefoot Hockey Goalie. “We’re taking a break from playing out of town shows, as Jaye has developed an addiction to hotel swimming pools.” Around the same time, a new song appeared available online: “I Think My Boyfriend’s Gay for Morrissey.”

“Joe and his friend Todd are life-long Morrissey fans, so that’s where the inspiration came from,” says Jaye. The song is chock-full of musical and lyrical references to the Smiths, with lyrics like “He’s fine until the music starts, then he won't touch my female parts.” For any diehard Smiths fan, it’s a cornucopia of all things Smiths-related.

“We knew the song would be kind of controversial because of how serious Smiths fans are. It was one of the biggest validations in my musical career to have strangers from different countries around the world arguing online about whether our song completely sucked or was total genius. I consider that kind of notoriety to be a small marker of success.”

Joe says the tune is by no means meant to mock. “When I heard the Smiths and what Morrissey was doing lyrically, it changed the way I thought about writing music. You can still write clever, funny lyrics and be a serious musician. It is way more difficult to write something clever that will make people laugh than it is just to write about life.”

In early 2012, they began recording a new full-length, with songs concerning fans of anthropomorphic funny-animal sex (“Furries”), as well as “Stranger Danger,” “My Next Lover,” “Olde Souls,” and more phonic funnies.

“I do worry about being pigeonholed as a ‘novelty’ act,” says Joe MacAskill, “because people sometimes underestimate the amount of thought and time that goes into writing songs like ours. That’s why we incorporate the punk-rock element and a variety of musical styles, to show that we’re versed in our craft.”

Jaye MacAskill disagrees. “I don’t mind being stereotyped, because I’m a big fan of old-school variety entertainment, like vaudeville and burlesque in the pre-WWII era and TV programming like the Carol Burnett Show and the Muppets. It’s difficult to stand out as a performer among so many other people doing more or less the same thing, like ‘rock’ or ‘country.’ There’s more diversity within the novelty acts.”

“When you make your audience laugh, you know they’re listening. It’s a way of communicating with the audience on an intellectual level, above just playing music for them.”

Joe says they get the best audience response at burlesque and variety shows up in L.A. and the Bay Area, where people aren’t coming out for a rock show, but to be entertained. “When you’re doing something comedic, the entire audience is hanging on what you will way next, and as a musician, it’s very flattering to have their full attention like that. As a band philosophy, we keep in mind people like David Johansen and El Vez who went in completely different directions from where they started out musically. They’ve been able to continue cultivating new audiences as a result. As you get older, it gets embarrassing to keep trying to be ‘serious’ rock stars.”

“So we switched to the musical comedy genre, so that we can keep playing music for at least the next thirty years.”

The comedic rock duo recorded for a full-length in April and May 2012. Regarding its first single “Furries,” Joe says “Sometimes, we write cute little ditties with uke and keyboard. Other times, the punk rock in us rears its mohawked head. On this track, cute took a backseat. Have you ever got all gussied up for a night of possible love? Spent good money on clothes, or many hours in the mirror getting that last hair in place? No more! Apparently, the new trend is to throw on a fun, fuzzy animal costume and just go nuts!”

“Yes, that’s a See-and-Say at the beginning of the song. And, yes, we left it in the box and returned it when we were done. Screw you, Toys-r-Us.”

Pony Death Ride’s debut full-length Not a Foal, Not Yet a Horse was released in December 2012. “We're playing a bunch of obscure but inappropriate holiday songs as well as arranging a few of our originals,” said the comedic duo shortly before a slate of 2013 holiday shows. “Funny how a song becomes a holiday song just by throwing in the word 'Santa.'”

“We're shooting a music video for our song 'Furries,' and we're having trouble getting people in animal costumes to commit,” Joe MacAskill told the Reader in early 2014. “We contacted the local furries group and, man, those guys are particular. I feel like we're arguing with 14 year-old boys. Because we are!”

Around the same time, the comedic duo recorded new songs with Mike Kamoo at Earthling Studios, including “Shut Up, Ted Nugent is Talking,” with an accompanying video by comedian Jason Bang that features artwork by Jaye. The duo's video for “Three Girls and a Cup...of Soup” features Joe MacAskill dressed in drag, joins other new vid clip online like “Furries.”

A December 2014 west coast Holiday Tour took them to San Francisco, Portland, Seattle, Pacifica, and a homecoming show in San Diego. The band entering the studio again at the end of May 2015. "The new album can be summed up as being about cats," says Joe. "The band will once again record with Mike Kamoo at Earthling Studios, because Mike understands us and he has a refrigerator for our sandwiches."

Their first appearance on vinyl was a summer 2015 Blindspot Records split-single with the Shambles and Satanic Puppeteer Orchestra, and they played L.A.'s Hollywood Fringe Festival June 20 as part of Uncle Impossible's Variety Show.

In September 2015, the duo released a new video for "Goodbye Chargers (We Don't Wanna Buy You a Stadium)." "We're getting a little political, I guess," said Joe at the time. "Actually, we just don't want to buy a stadium."

Their annual Christmas tour went from Tucson to Albuquerque to Denver and nooks and crannies in between in December 2015. Their video for "Nothing Beats Old People At Christmas" co-stars locals Adam Gimbel and Allison Gill.

Added Jaye, "We have two cats, so we feel we're highly qualified to take on this subject." Ranging from jazzed up ditties and piano laden ballads to punk rock anthems, the new songs stay true to the duo's signature sassy, blue comedy style and irreverent sense of humor.

Cat Sounds features nine tracks including "Your Cats Are Crap," "I'm a Cat Guy," and the album's first single "Grumpy Cat (Ain't All That)." The record was once again recorded and engineered by Mike Kamoo of Earthling Studios, who also plays drums on most of the songs. Several other area musicians helped round out the diverse sound.

Summer 2017 saw the release of a new single and video for “Let Me Tell You ‘Bout My Bike,” an homage to two-wheels featuring the Schizophonics’ Lety and Pat Beers on drums and guitar, plus trumpet by Jason Hanna (Jason and the Bullfighters). “My Bike” was recorded, engineered, and mastered by Mike Kamoo of Earthling Studios, with a music video by Jeff Forest (Doubletime Studios), shot partially in the famous clamshell bandstand in the Mississippi Ballroom of the Hotel Lafayette.

In late 2017, the duo recorded a new track, "It's a Tom Waits Christmas." The following Christmas, to promote their holiday single, “Hobby Lobby Christmas” b/w a cover of Jon La Joie’s “Cold Blooded Christmas,” the duo embarked on a western U.S. tour that wrapped December 23 at the Casbah, where they read selections from their book How to Talk to Your Kids About Santa.

A new holiday release dropped in December 2019, The First Leon Christmas Album, featuring tracks like "All I Want For Christmas Is a Divorce" and "Your Baby's Ruining Our Christmas."