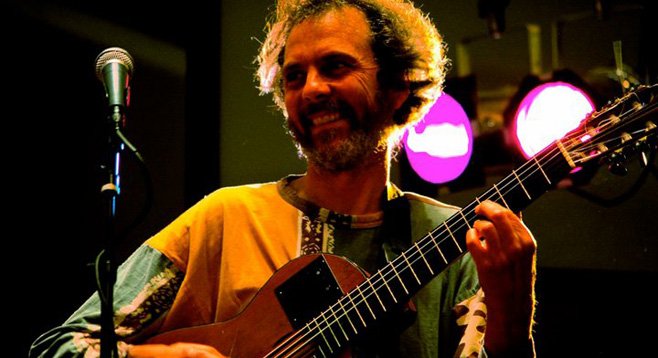 Sound description: Jazz fusion in its most engaging form, as progressive as John McLaughlin and as jazzy as Pat Metheny, but not burdened with enough time changes to cause epileptic fits.

Peter Sprague was eight when his family moved from Cleveland to Del Mar, where surfing and music became, as he puts it, his “life and religion.”

“Though I hate to admit it, I don’t really like surf music,” he says. “The Beach Boys? Well, I used to like it when they’d mention Del Mar in their ‘Surfin’ U.S.A.’ tune, but the music that really moved me between surf sessions [was] the Beatles, Joni Mitchell, Jimi Hendrix, Crosby, Stills, and Nash, Buddy Miles, and Santana. Try putting on ‘Black Magic Woman’ and then paddling out at Eighth Street in Del Mar. That combination works for me.”

Sprague picked up the guitar at age 12, studying with San Diego jazz guitarist Bill Coleman. He turned to jazz and formed the Minor Jazz Quintet with like-minded schoolmates. “When we played gigs, we had to legally stay on the stage during breaks to keep the ABC [Alchoholic Beverage Control] from busting the club for minors roaming in an over-21 environment.”

Following a year of study at the Interlochen Arts Academy, Sprague studied with Pat Metheny in Boston and performed with Chick Corea’s band. “Here I am, a young musician, and I’m hanging with my idol Chick Corea. I’m thinking everything is just right in his world, and as far as I can see he’s living the great ride. He’s playing insane music with off-the-Richter musicians, and plays concerts for audiences that devour his every note. Then he tells me that he wishes he could fill large arenas instead of small concert halls. Wow. That human trait of always wanting more, and always being a little dissatisfied with what you have.”

Sprague began his recording career in the late ’70s, with several releases on the Xanadu label (the Path, Message Sent On the Wind, Bird Raga), before moving to the larger Concord Jazz Records, for which he released Musica Del Mar and Na Pali Coast. He has since acquired the rights to all of his albums and made them available via his own label, SBE.

“SBE stands for striving-to-break even,” says Sprague. “We’re not trying to achieve ‘hit-record’ status. My objective is to keep the costs low, release a product I’m happy with, and make just enough bread to break even, so I can do it again.”

Sprague eventually returned to Del Mar and has become a fixture in the local jazz scene, along with brother Tripp (sax and flute) and father Hall T. Sprague (percussionist).

His Spragueland studio custom-built — there are no parallel walls anywhere; there’s a large group-recording main room, a piano room, and several smaller booths. You can see the Pacific Ocean from his second-story window, which is important to Sprague, a devoted surfer who is always game to adjust his schedule should the waves look inviting.

Spragueland has recorded many local musicians — there are hundreds of releases on the label’s imprint. “I record my own music but also a lot of other people’s music. They will hire me to help produce, play, and record them,” says Sprague. “But, since the economy turned, I have more free time, which I kind of like. It allows me to tour and work on my own projects.”

Constantly performing and touring, he describes his worst gig experience: “I get a call from pianist Rob Schneiderman, and he’s got a gig playing jazz in Spain for a month, starting in one week, and he invites me on the tour [but] someone steals my precious handmade guitar...next, I’m off to Western Union to receive some wired money from my folks to buy a new guitar.

“While at the Western Union, an armed gangster holds up the bank next door, and I’m gathering my money amidst some gunshots...then I fly to Spain and I land at the airport, and my friends are not there to pick me up. I’m young, and I didn’t gather all of their info, so I don’t know how to get ahold of them...I take a cab to the city central, and I’m literally wandering around the streets, not sure what to do.

“Then I hear the sounds of Charlie Parker playing ‘Just Friends’ from a nearby street café. I move a little closer, and discover my friends listening to Bird and having an afternoon coffee. Unbelievable...I was saved, I thought, but it turned out that the rest of my time in Spain was filled with lousy gigs, canceled gigs, [and] very little vegetarian food. I survived and gained some wisdom, but I also got really sick and spent a week in bed with food poisoning.”

In December 2011, Sprague debuted Dr. Einstein's Spin, a longform piece commissioned by Chamber Music America as a part of their New Jazz Works program. “I applied to Chamber Music America twice, and the first time, in 2009, I didn’t get it,” says Sprague, adding, “They were really cool about answering questions, and I found out I did really well with the music I submitted, but they weren’t too impressed with the writing part of the grant application. So, I really went into a lot more detail the second time around, and got the commission in 2010.”

The commission-grant, which paid the guitarist about $22,000, covered the writing of the piece, which Sprague describes as “Pretty epic. I took a whole month to write it...[it’s] about thirty minutes long, it’s in three movements. The first is called Molecule, and it’s got some crazy stuff in it. The second is kind of peaceful, Rainbow, is its name and the third movement is the Expanse.”

Much of 2012 was spent touring and playing solo shows, often with jazz great Dianne Reeves and putting on concerts with his band Blurring the Edges. His 2015 album Dream Walkin’ was recorded with frequent collaborator Leonard Patton.

Sprague and Randy Phillips released a collaborative album in August 2018, Sparks and Seeds.