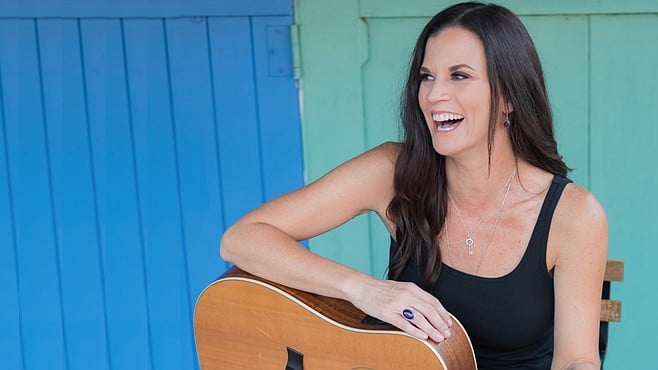 Americana singer-songwriter Kathryn Cloward was honored as one of San Diego Metropolitan magazine’s Top 40 Under 40 in 2010, and is the founder of the multi-layered media company, Kandon Unlimited, Inc. “I launched and built my first company to achieve multi-million dollar gross annual sales and then it crumbled completely as the 2009 recession impacted most of my clients and eventually me,” says Cloward of the events that led to her vocational transition. “It’s been my seventeen years of entrepreneurial business experience that has helped me move my music career forward...I have completely reinvented myself, and I’m now fully living the life I’ve always dreamed of living. I do everything with tremendous intention.”

The native San Diegan is the creator, author, and songwriter of the Kathryn the Grape series of award-winning children’s books and music CDs, featuring an “everyday girl” who helps kids of all ages develop authentic self-love. The series is intent on sharing messages of loving kindness, acceptance, and compassion for others. Kathryn hopes her books and music helps others along a path of living purposeful, magical, and colorful lives.

“I’ve been writing song lyrics and hearing new melodies in my head for as long as I can remember. I have always wanted to share my original songs with the world,” says Cloward. “It’s truly a joy to see kids and their parents singing and dancing along, having fun while strengthening their belief in themselves.” The series won five 2017 Family Choice Awards, and her book Kathryn the Grape’s Kindness Confetti was awarded 2017 Best Children’s Fiction Book by the San Diego Book Association.

In addition to her books and CDs for children, Cloward is a solo songwriter and performer. In 2015, she released two albums, Free to Fly and A Soft Place to Fall, with 22 new songs about her personal journey of transformation and unconditional love.

Her next dual album release took place in summer 2017, with Ripple Love and Secret Keeper, both recorded at Berkley Sound with Jeff Berkley (who also worked on her A Soft Place to Fall full-length and her 2016 Kathryn the Grape album We’re All In This Together).

Both albums are greatly informed by the then-recent loss of her father to cancer. The July 2017 release party for both albums doubled as a fundraiser for Rady Children’s Hospital and its Peckham Center for Cancer and Blood Disorders. “I know from personal experience that many people are walking around wounded by life experiences, and those unhealed wounds are light dimmers. My hope is to help people heal their wounds.”

Producer Jeff Berkley says of Cloward "Kathryn is one of those rare performers that can, through her own raw, emotional, stories empathize with the audience. She’s there for them to lean on. Everything she does goes to that end, so recording her records is about us finding musical ways to illustrate and support that."

A video for "Wild Horse" was shot on location in Ramona at Capability Ranch, a nonprofit special needs activities center for developmentally delayed youth and young adults.