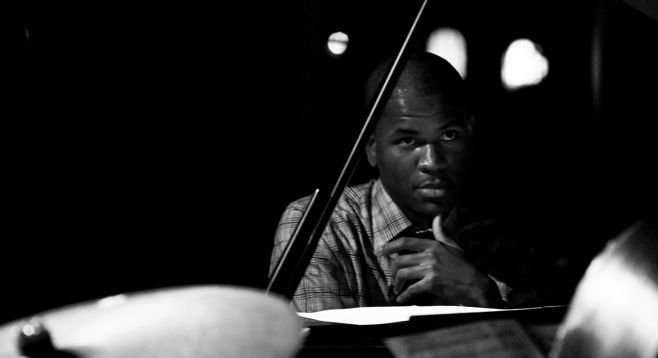 Jazz pianist and composer Joshua White was five years old when his family moved to El Cajon in 1991. He began formal piano training at the age of seven, becoming the organist and pianist for the Encanto Southern Baptist Church by age ten. He had parallel musical training in both classical and gospel music traditions before encountering jazz music at the University of California, San Diego summer camp in 2003. That’s where his natural abilities and innate musicality made an impression on his instructors. Before long, he was playing with them.

He dove into the music with the help of musicians like composer Anthony Davis, saxophonist David Borgo, flutist Holly Hofmann, and pianist Mike Wofford. “Joshua was the most devoted student I’ve ever worked with by far,” says Wofford. “Absolutely focused and with a great intuitive grasp of the music, even at that early stage."”

White has absorbed some of Keith Jarrett’s lyricism, a bit of the power of McCoy Tyner, and some of the subtle grace of elders like Hank Jones. He has toured with bass star Rob Thorsen, as well as playing on recordings by Karin Carson, Christian McBride, and others.

In September 2011, he earned second place in the prestigious Thelonious Monk Jazz Competition on Monday, pocketing a $10,000 prize. “It was definitely a great experience, and I’ve received a lot of opportunities to explore different avenues, whether it’s meeting new people, or opportunities to play with my own band, exploring my own music and arrangements. But I will say that the hard work doesn’t stop. You have to continue to move forward and, if you want to make anything happen, you have to do it yourself.”

White is a master at listening and responding in the moment to whoever he shares the stage with. Even though he’s developed phenomenal technique, White is more about engaging in a musical conversation that responds to the individuals at hand, both on the bandstand, and in the audience.

“It’s not just about us [musicians], in my opinion, it’s like the music is only found within that dialogue, those open lines of communication, between the musicians and the active listening audience. I mean, everyone’s involved in that environment.”

Anyone who has caught White can testify to his astonishing facility and ability to blend his talents with whomever he’s playing. He sounds comfortable and authentic, whether it’s in a be-bop or Latin setting with trumpeter Gilbert Castellanos, on a recording session supporting vocalist Sharon DuBois, or in duet with contrabass giant Marshall Hawkins.

In early 2012, White took on his first engagement as a leader in NYC, at the Tribeca Theatre as part of the Monk-In-Motion series, featuring performances by the top three finalists in the competition.

His album 13 Short Stories was released in 2017. “It’s a celebration of my new music,” he told the Reader. “The new album, it tells a story of the band, of us as improvisers of this music.”