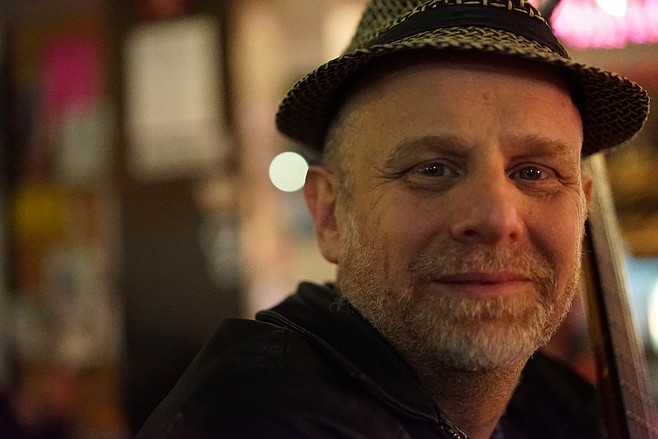 “I never sang a note until I was 30 and didn’t even think about a music career until my 40s,” says comedic singer-songwriter Ronald Hill, aka Happy Ron.

Beginning with open mics and tutorials found in books like How Music Really Works by Wayne Chase (“I went on a weeklong retreat with him in Canada”) and Songwriting Secrets of the Beatles, Happy Ron has racked up over 1000 performances and a San Diego Music Award nomination for Best Local Recording for his 2008 debut Terribly Happy.

Not that it all got off to a rolling head start. “It was 1997, when my original singing teacher threw us up on stage. I mumbled the Beatles’ ‘In My Life,’ and the teacher shouted, ‘Project! Project!’ I mumbled, ‘I am projecting.’ The next time, I literally shouted a sensitive love song, almost at the top of my lungs. She shook her head and said, ‘Don’t project!’”

Produced by Sven-Erik Seaholm, Terribly Happy includes his ode to spanking "All She Needs Is a Spankin," as well as “The No Tantric Woman Blues,” “Sick of Her S**t,” and “Dickless Wonder.” Guest locals include Kelsea Little (The Wrong Trousers), Robin Henkel, and Cathryn Beeks.

Playing music isn’t the only thing that makes Ron Happy. In 1992, he compiled a book that was later made into a website: Cloudbusting -- Kate Bush in Her Own Words. In addition, “I’m a trained boxer. It still goes back to music, though, because my song ‘Beat the Crap’ tells the true story of the weird bond you form with people when you do boxing training with them.”

In Autumn 2010, he auditioned for the upcoming season of America’s Got Talent. “I will be on the show, because they got a lot of footage of me at the front in crowd shots, next to the host as he talked. They called me up front ‘cause I looked cool, and they interviewed me.” He was seen on the May 31 season debut, lined up for auditions alongside famous former neighbor/show host Nick Cannon and a Michael Jackson impersonator.

Born without a socket in his left hip, Hill finally had hip replacement surgery in 2016. “I was amazed at how much more connected to my body I am, and how much more I’m able to focus on my music. I’m so much more centered and able to sit and concentrate better. It has totally changed my relationship with music from a struggle to a joy.”

As of 2019, he was teaching music specializing in people "who feel they can't do music for whatever reason. Most of my students are tech people who like me are close to being autistic and who don't feel connected enough to their bodies to experience music fully."

In Autumn 2019, "A group from Barcelona, High Pijama, found my more than 10 year old track 'No Angel' and decided to turn it into a dance track. This was somewhat surprising to me as the song was one of the only serious and least danceable songs on my album,” says Hill. “Even more amazing is the theme of the song is about an older person telling his older partner that he isn’t interested in younger women, but High Pijama have turned it into something for younger people to dance to. They’ve done an amazing job, adding drums and remaking the old track into something that sounds entirely new.”

"Happy Ron, who could barely walk six years ago, got his hips replaced and now is the star of a new FuturePop Americana hit."