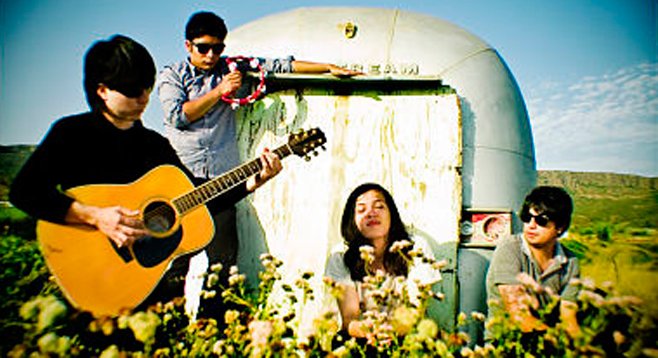 Spreading the gospel of minimalism and looking to further exploit the possibilities of the avant garde and pop songwriting like their musical influences, San Diego/Tijuana minimal garage rockers the Electric Healing Sound has been scavanging the nihilistic and subversive side of rock and roll to amplify their obsession with noise and feedback.

Orchestrating unstructured songs squealing with feedback to sweet love songs, the repetoire is a calculated attempt to recreate the noise they once heard in bands that no longer exist. Music that they want to hear.

Like the Velvet Underground. “We knew it from the get-go,” says rhythm guitarist Ricky Soltero. “We even cover ‘Waiting for My Man’ live. We don’t hide our influences.”

Soltero came to the States from Mexico in the third grade and grew up in San Ysidro. “I’ve been called pocho once or twice,” Soltero laughs.

“We take advantage of the San Diego-Tijuana thing,” Soltero says. “Up here we are a TJ band. Down there we’re a San Diego band. People like it.”

Since their first gig in September 2010 at El Burro Reyado in Tijuana, Electric Healing Sound has been bringing San Diego bands such as Shiva Trash, Baghdad, and the Last Years to play south of the border.

“I want to get rid of the old clichés about Tijuana,” Soltero says. “If you go looking for trouble, yeah, you’ll find trouble. But Revolución and [Calle] Sexta is really chill. There are really good musicians down there, and it’s ridiculous that nobody knows about them.”

Stringent visa laws aside, Tijuana bands hesitate to play in San Diego because “they feel like they’ll get ripped off. There are places in TJ who’ll charge cover and won’t even give you a free beer. So, we started boycotting those places and playing other venues who give us drinks all night.”

“There’s a weird thing going on in Mexico,” says bassist Eric Curiel. “People get really excited when something from outside happens. That’s why we’re bringing San Diego bands down there. It keeps it exciting.”

“There’s a thriving scene down there,” Soltero says. “People are coming to our shows and being inspired. Bands spring up and ask to play. They open doors for us, and that’s the only way we will get our scene started. At the Dragon Rojo gig with Shiva Trash, we couldn’t even move. I’m looking a guy in the face while singing. They haven’t heard music like that in a long time.”

In 2011, they released a single: “Woman #3” b/w “Perfume.” Their debut music video, which features the track “Tangled Up,” was posted online in May 2012. Tangled Up is also the name of their debut record, released in July 2012 and recorded on reel-to-reel audio tape at Electric Orange Studios with Andrew Montoya (the Sess, Beaters, Ale Mania), who mixed and mastered the record at his studio, Pandemonium Recorders. Shortly thereafter, the album was released on cassette via Ames, Iowa label Workerbee Records.

Next came a West Coast tour with Cholo Punks label mates Shiva Trash. “The whole trip was an adventure,” says guitarist/vox Ricky Soltero. “Eight human beings in one van, hoping to crash at peoples homes. We slept in some dude’s garage in Los Angeles. We slept in my friend’s small apartment in San Francisco. Random people invited us to their homes because they loved our bands! It was great.”

2015/2015 saw the drum seat occupied by various players, including Julio Pillado (Orlando & the Shantelles). A new single was released in May 2015, "Whistling Song" b/w "Seven Year Itch" (Workerbee Records), with a video streamed online for the A-side track.