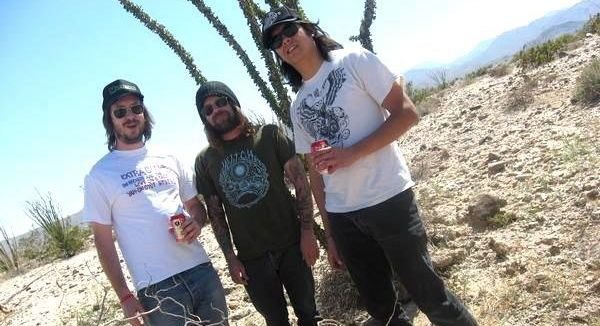 Inspired by Krautrock and Japanese psychedelic bands when it launched in 2001, Earthless features drummer Mario Rubalcaba, who formerly played with Rocket from the Crypt, the Black Heart Procession, Hot Snakes, the Sultans, and Clikatat Ikatowi. Guitarist Isaiah Mitchell is a former member of Nebula and, as of late 2009, he was also playing with Lady Dottie and the Diamonds. Bassist Mike Eginton formerly played with Electric Nazarene.

When Mitchell taught guitar lessons at Moonlight Music in Encinitas, he exposed the two guitarists of Sacri Monti to the way of the heavy space-jam.

When they were co-owners of Thirsty Moon Records, Rubalcaba and Eginton used every opportunity to share their sonic vision to in-store clients. “I would be happy to introduce a 19-year-old skater to Amon Duul 2,” says Rubalcaba. “We always wanted to show kids a new wave of underground stuff.”

At the 2007 San Diego Music Awards, jam-band Earthless took home the trophy for “Best Hard Rock Album” for their Rhythms from a Cosmic Sky. In March 2008, they played the annual South By Southwest (SXSW) music festival in Austin, Texas.

The band's double disc album Live at Roadburn, recorded at a festival in Tilburg, Holland, was released in October 2008. Steve Dolcemaschio of Tee Pee Records reports that the album came about as an unplanned accident.

“Earthless was originally only supposed to play a small 200-person room...The band was setting up when the guy who organizes Roadburn ran into the room, yelling that [headliners] Isis only played an hour of their two-hour slot. They were scrambling to find a replacement band, and suddenly Earthless was up on the main stage of the festival, in front of thousands of rabid concertgoers who never heard of them before.”

According to Dolcemaschio, Earthless weren’t given additional pay for the headlining set. “It was just a spur of the moment opportunity, and the band took it. It wasn’t until after they got back that we found out the show was taped…turns out the recording sounded fantastic, so we made a deal [with Festival operators] to put it out.”

They earned rave reviews for their 2010 CMJ festival performance. Said one reviewer, “The epic shredding of guitarist Isaiah Mitchell harkens back to the days were psychedelic rock had balls the size of grapefruits and wasn’t afraid to take its listeners on a ride for which they may never return.” Other locals to play CMJ this year included Crocodiles, Tape Deck Mountain, and Heavy Hawaii.

In early 2011, the band embarked on a tour of Australia. A new full-length, From the Ages, was released in October 2013, recorded at San Francisco’s Lucky Cat Recording. “My favorite aspects of the new LP,” explains Rubalcaba, “are that we got to record live in a big room and play loudly. We got to record it with a friend [Phil Manley] who gets what we are about. It just makes the whole process run so much smoother...it’s fun to tweak things in the studio and add stuff on to the songs. We didn’t go crazy with that kind of stuff but it just adds some atmospheric living to it.”

As of 2015, the band had been on three Australian tours and five European tours. Their first tour of Japan happened in January of that year.

2016 saw a split single with Harsh Toke, "Acid Crusher" b/w "Mount Swan," released May 27 on Tee Pee Records. A new full-length debuted in 2018, Black Heaven, released March 16 via Nuclear Blast and recorded at Rancho de la Luna in Joshua Tree, Calif. with Dave Catching (Eagles of Death Metal) handling production. It was preceded in January by a single for "Gifted by the Wind." It's one of four tracks on the album to include vocals by Mitchell, a departure from their previous concentration on long and trippy instrumentals.

“It’s an enjoyable and refreshing process, having to consider vocals being in the mix,” says Mitchell. “If we have the capability in integrating vocals, why not?”

Drummer Mario Rubalcaba points out, “We’ve done a few songs with vocals in the past for various splits and comps. Like Isaiah said, why not? It was kind of a fun challenge to make a record in a more traditional format.” Currently a trio, Earthless includes former Electric Nazarene bassist Mike Eginton. “On the older records, Mike was responsible for a lot of the riffs that would start these jams, but on this one, Isaiah really brought his own pizzazz.”

The album was promoted with a video for “Volt Rush,” featuring mythical skateboarder T-Spliff (aka Taylor Smith) as he boards across San Diego and neighboring Oceanside.

In 2018, they staged live performances with Lance Gordon's Mad Alchemy Light Show, which provided psychedelic backdrops for performers like Roky Erickson and Big Brother & the Holding Company. Their 2018 album Black Heaven was named one of the Top 50 Best Albums of 2018 by mxdwm.com.

A 10-date tour kicked off October 3, 2019, at the Empty Bottle in Chicago, running through October 13 at Deluxx Fluxx in Detroit, with opening acts including Maggot Heart and locals Sacri Monti.

The following month, on November 11 in NYC, guitarist Isaiah Mitchell debuted as a new Black Crowes member, joining the band just in time for their 30th anniversary reunion tour. They warmed up with another club gig L.A. before launching their full tour the following summer, including a date at North Island Credit Union Amphitheatre on September 18.