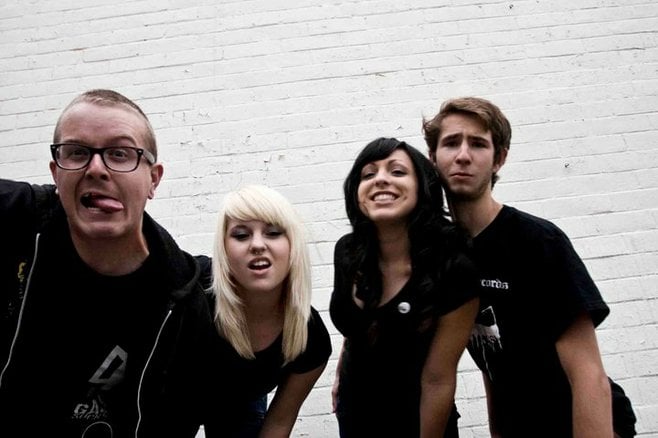 Influences: Fat Wreck Chords, the Go-Gos, Sick of it All, No Use For A Name, Joan Jett, Suzi Quatro

“The BombPops started in 2007,” says Jen Razavi, aka Jen Raz, the singer-guitarist for the female-fronted North County punk-rock band, “but Poli [Van Dam, guitar/vocals] and I met in 2005 at Stripline [studios in Oceanside].

"We were in other bands. We just became really good friends, and I asked her if she wanted to start a band with me. Dylan [Wade, drums] and I went to Carlsbad High. I met him when his band, Geek Mafia, played [a] battle of the bands his freshman year…my junior year. I liked their music and I thought he was hot, so I asked him to sign my yearbook, and we’ve been great friends ever since.”

Former bass player Trevor Robertson accompanied the BombPops on their first West Coast tour in 2010. Razavi relates some of their first-time difficulties.

“We got to the Doll Hut [in Anaheim] and we were pretty excited because it was the first show of our tour, but then they told us we weren’t gonna be able to play because members of our band weren’t 21. I was the only one that was 21 in the band. So, what they said was, as long as our drummer was 21, he could set up on the stage — drums and amps… He wasn’t 21, so he used Poli’s boyfriend’s I.D. to get in the bar, and me and him set everything up. And then Poli and Austin had to run cables out the door and set up a mike stand outside and play the show from there.”

“It actually turned out to be a really good show because people weren’t sure what was going on ’cause we were inside the bar and they were outside the bar, but we got a good response and sold a lot of merch.”

With a tour under their belt and a batch of songs worked out, the BombPops! released Hair Products and Narcotics in early 2010. “We recorded [the record] with Jeff Forrest at Doubletime in El Cajon because he’s recorded a lot of great San Diego bands over the years, including blink-182, Rocket From the Crypt, Buck-O-Nine, and Battalion of Saints, so we knew it would sound good.”

In October 2011, the band drove to Cleveland and Pennsylvania to play two shows with their idols, NOFX and Anti Flag, before embarking on another tour that wrapped up November 6 at the Metaphor Café, a record release gig for their new EP Like I Care.

The EP marked the band’s debut on Red Scare Industries, a Chicago based punk label. “They’re home to a lot of really good bands out right now like Teenage Bottlerocket, the Menzingers, Cobra Skulls, and the Copyrights, all of our favorite bands,” Razavi says. “It was actually a pretty good deal for all of us.”

As of 2012, the Bombpops had a little of that Go-Gos thing going on, only in this case, the sound was harder and faster. The melodic hooks were all in place but with much less of a pop radio feel. The all-guy rhythm section consisted of newest addition Neil Wayne on bass (replacing Trevor Robertson), and drummer Dylan Wade.

“A lot of our influence comes from late ‘90s Southern California skate punk. Bands like Fat Wreck Chords, No Use For A Name, that’s definitely the kind of style we’re going for.” With new bassist Neil Wayne, their 2012 U.S. tour started with gigs opening for NOFX and Anti Flag.

By 2016, the lineup was Jen Razavi, Poli Van Dam, Neil Wayne, and Josh Lewis. Their early 2017 album Fear Of Missing Out was recorded at Black in Bluhm in Denver, CO, preceded by a single for "CA in July." The record was produced by Chris Fogal, of Colorado pop-punk lifers the Gamits,

"We’re big fans of the Gamits and, after meeting Fogal in Paris when we played with them in the spring of 2015, we knew we wanted to do our next record with him," says Razavi. "Our good friend Michael Marti, also of the Gamits, flew out from Bern, Switzerland to work on the album as a tone consultant. He owns a guitar shop in Switzerland called Yeah Man's Vintage and Used Guitars, from which we all own guitars. He flew out with tubes, pedals, and pick-ups to use on the record."