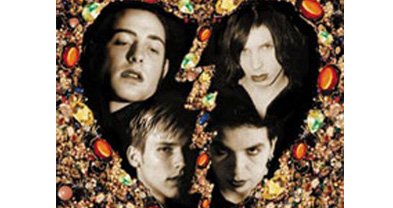 Sound description: Hardcore punk, for punky hardcores, sprayed in your face in one minute bursts, sort of like someone emptying cans of Mace in your eyes.

Current Status: Though broken up for years, their songs are beginning to surface again on punk compilations.

Post-hardcore rockers Antioch Arrow was on the seminal hardcore/emo label Gravity Records, home of Heroin, Angel Hair, and Mohinder. The label was responsible for putting San Diego on the map in the mid-1990s as one of the centers of the movement.

Antioch Arrow used the fast and chaotic framework of hardcore to create songs that were at times melodic and at times indiscernible, but almost always curious and played at breakneck speed. Their calling card was surely their vocalist Aaron Montaigne. Whether dramatic and theatrical or whispered or shrieked, his obtuse and stream-of-consciousness vocal delivery and lyrics forced an audience to react.

In 2005, Three One G Records re-released the 1995 Antioch Arrow album Gems of Masochism. In late 2011, guitarist Jeff Winterberg was diagnosed with a rare form of brain cancer, medulloblastoma, which typically manifests in children and affects less than two percent of adults.

Guitarist Jeff Winterberg is also a photographer whose 2004 book Rat-a-Tat-Tat Birds: Photographs by Jeff Winterberg, 1991-2003 includes local bands like Drive Like Jehu, Rocket From the Grypt, the Gravedigger V, and Clikatat Ikatowi. In 2012, it was revealed that he is battling a rare form of brain cancer.