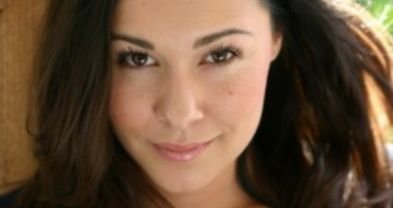 Sound description: Smooth jazz-influenced vocals, akin to Mary Ford but with some R&B flavor and pop influences like hip-hop.

“Music allows me to express myself, while acting allows me to get away from myself,” says Amber Ojeda, who played a recurring role in the locally-shot TV show Veronica Mars and fronts a band bearing her name. “I originally auditioned for the part of Cathy when the show was in its pilot stage,” she says. “It’s actually not as crazy and thrilling as everyone thinks. Most of the time, you’re in your trailer waiting for your scene.”

A former San Diego Gulls Girl, Ojeda has lived locally since she was three. “I’ve been offered recording deals from multiple labels, ranging from small indie companies to substantially larger labels. However, none gave me the ultimate control of my music, so it makes no sense to me to sign. I would rather be independent than sell myself short and be a marionette.”

Ojeda feels she’s struck a balance between her two careers. “I don’t envision music forcing me out of acting,” she says. “I landed the theme song in a movie called ‘All That I Need.’ When I went to meet with the director to discuss what elements he envisioned for the lyrics, he ended up casting me to be in the movie as well.” She also landed the lead role in “Prayer Before Murder,” for which she has recorded soundtrack music. “Usually, I like to promote either one or the other, so people take me and my craft more seriously,” she says.

She says this wasn't always easy, especially earlier in her career. ”For a young girl trying to get recognition in the music industry, your morals are tested on a daily basis,” says the 23 year old. “My first experience meeting a record producer [three years ago] seemed to go very smoothly. He told me he loved my voice and liked my style. However, as soon as I left to use the bathroom, he told my manager that he couldn’t wait to sleep with me…yes, there was a couch in his studio.”

In 2006, Ojeda was hired as lead singer and songwriter for a female vocal group, but she says the first recording session wasn’t much of a group effort.

“The other girls were pissed that I was in the booth 75 percent of the time and not them, and one of them stole my lyric book. Someone later left a comment on my website message board with the words of a poem I had written in that book, with a note bragging, ‘I have something you don’t have.’ I couldn’t believe it!”

She has since gone solo, but Ojeda says would-be impresarios still assume a single female needs some kind of gimmick to succeed.

“I was recently offered a record deal, but they didn’t even want me to use my name or sing my music. They just wanted my look, and they wanted me to sing hard rock, which is so different from what I actually sing. I felt totally disrespected for my voice and musical style, like a piece of meat.”

Ojeda kept playing around town, sometimes with the band Chameleon. “Galactic Love,” the first single from her 2011 album Space.Bar.Love became available online in May 2011. Around the same time, she began appearing on the Bravo TV talent contest Platinum Hit.

Though she didn’t win, she says, “The show was a crazy whirlwind. I learned a lot, I grew a lot, and I also realized how important it is to speak my mind if I don’t believe in the integrity of a song. I could have used a lot more sleep, a little more wine, and a stronger stomach for people being rude to each other.”

Her contract with the network required her to delay the release of her full-length Space.Bar.Love until early 2012. “As far as the album title goes, I really pondered what would represent this eclectic body of work. Space references my fascination with the sky. Bar has a double meaning, the obvious one and the space bar on a computer keyboard. There’s a song on the album called “F13” that depicts a broken relationship and the desperation toward trying to connect with someone, even if it may only be through social media. Love, of course, represents the driving force behind everything.”

The full-length is a digital-only release. “I’ve always leaned toward releasing music via the internet. As a consumer, I rarely purchase hard-copy music, and I haven’t for years, unless it’s a limited compilation or something. It has nothing to do with cost or sales dropping. I simply feel that streaming music and online sales are the future of the industry.”

“The only reason I released my last album Here I Am as a hard copy in Japan is because my label there, Sweet Soul Records, still has a strong record-store presence.”